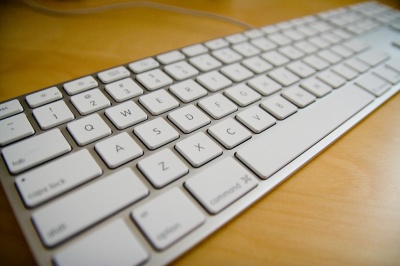 I've heard all the privacy arguments against keyloggers but I'm not sold. If you are typing into a computer, particularly one which is near constantly connected to the Internet, you need to accept that there is very limited privacy. For very private writing, it should be done on paper or on an old computer which is no longer capable of being hooked up to the Internet easily or at all (i.e. missing a network card and wifi and/or automatic DHCP).

Better to remove the floppy drive as well and unplug the USB connectors. You can do your backup to a zip drive for which you keep track of all the media (people don't carry around zip disks anymore, so if you have someone determined enough to come after your writing computer with an extra zip disk, nothing will protect you). You could also encrypt the disk on which your secrets are written, but my own experience with encrypted disk space is that the person who will suffer is you.

So returning to the keylogger – the keylogger will save your backside at least a few times a month (sometimes in a week) when you think you've lost all your work (usually about a half hour or so). That means a keylogger is worth about 25 hours/year of your time. Your best time when the creative and intellectual juices are really flowing. I think there's about three to five such hours in any given day. That makes a good keylogger worth nearly a week's work (premium hours remember) per year. I.e. a good keylogger is worth between 4000 in most Western countries. If your week is worth much more than $4K, you are probably dictating and your assistant would be transcribing so you wouldn't get the same value out of a keylogger, but your assistant would.

What are the options on Mac OS X (we'll deal with Leopard and above at this point)?

A comprehensive spell checking suite with a feature called GhostWriter. I installed, bought and used Spell Catcher for about a month and then had it lurking around for a few months. Spell Catcher interferes with your input menus, is always turning itself on and off. GhostWriter was unreliable in my testing. Sometimes it was running, sometimes it wasn't. Having a browser crash and then learning that your typing wasn't not saved is extremely irritating.

Spellcatcher is one of the more invasive and troublesome apps I've had the displeasure of having on my computer.

Update 20100326: Spell Catcher rose from the dead recently when I just plugged in an old hard drive. I was totally unable to type in Open Office or TextEdit due to a "Alert: Couldn't Contact Spell Checker". It took another hour of chasing around info on forums and a full cache delete via TinkerTool System 2 to get rid of the Spell Catcher zombie. Even more annoying is Spell Catcher developer Evan Gross's aggressive attitude that this is Apple's fault and user error. I was on deadline for an article rewrite for press. Not fun. 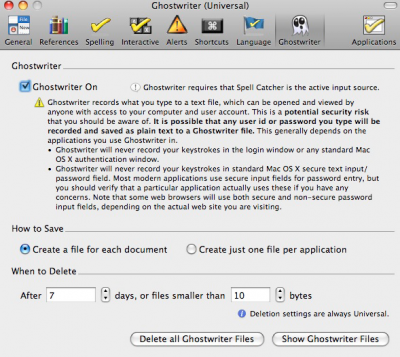 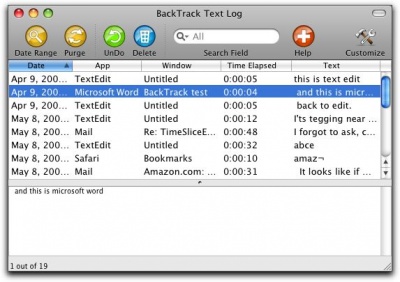 Update: The background process I didn't like is actually the logging daemon. The test Bill does against other copies of BackTrack in use is done once at startup, according to Bill. If anyone has other information let me know, but as far as I can tell that's how it works.

I use BackTrack myself on my primary computer where I do most of my writing. I like it as it's easier to recapture missing text than any other solution. BackTrack is clever software well-executed and fairly priced.

Uninstaller is partially broken. Logs come with all the delete gibberish and no date or time or applications stamping. But definitely priced right. Software is looking for a new owner. Perhaps Foliovision could pick this one up and make it work. We're bit too busy and don't have the right expertise in-house yet.

From a very strange and mysterious developer. The logs are also dirty with delete and backspace characters, although apparently application changes are noted. At $20, the nod has to go to either BackTrack or logKext, depending on one's own fluency. Verdict: Not recommended.

Use a good name, like "iTunes Optimizer", "Disk Speedup", "QuickTime Control", or "MP3 Accelerator" with the thought that if it looks useful or it makes the computer run better, people won't delete it. Please remember that changing the name of KeystrokeRecorder will create a new preferences file based on the name you provide.

Last updated in 2003. The price is right but Monitorer doesn't work, runs up the CPU and is PPC. Verdict: RIP.

It was lousy expensive software. Good riddance. If you got burned on Typeagent and it won't run on Snow Leopard, let me suggest logKext. You won't lose any money this time around.?

So what keylogger am I using? BackTrack. BackTrack provides great safety and ease of use. The little bit of CPU and memory it costs me is worth it for the moment as with BackTrack restoring text is a pleasure rather than a chore. I wouldn't install or use it on a computer dedicated to heavy duty video editing or rendering though, as you want to keep such a rig as clean as possible. Normally one doesn't do much typing on such a rig. BackTrack is for people who write a fair amount.