What I’m most focused on here is on OS X WordPress publishing tools which at least allow the writer to write in Markdown.1 The ideal is to allow both writing and editing in Markdown. There’s four active players: MarsEdit, Byword, Drafts and iAWriter.

Three of them are a disappointment to serious Markdown writers who wish to publish on WordPress. All of Byword, Drafts and iAWriter publish in one direction: from Markdown to WordPress. Once you’ve pressed publish, your post will be in HTML

All of them of course now struggle with the Gutenberg editor, as each of them is publishing into a Classic Editor block for now in HTML. Eventually perhaps some of them will offer an option to publish to a Gutenberg Markdown block instead. This should work even for those of us using Parsedown, as the HTML comments about the Gutenberg block should do no harm if Gutenberg is not installed.

The team at iAWriter are intelligent enough to write a proper REST interface and to allow publishing directly in Markdown, without Gutenberg. Optimistically as independent (non-Jetpack) and open source Markdown publishing becomes available again for WordPress with our new Typewriter plugin comes out iAWriter might eventually do just that.

If you think there’s a hidden gem of an editor missing here, it’s probably on the list of abandonware editors at the bottom of this post. If not, please let me know in the comments.

I don’t know if you find the reading above as depressing as I do. If you work with WordPress and like to write in Markdown, probably. There’s just one WordPress Markdown editor for Mac standing. Fortunately, it’s a good one.

MarsEdit is the only one of these editors which is two-way. It also has the merit of offering two modes:

The plain text mode is originally supposed to be for HTML. The keyboard shortcuts for lists, bold, italic are very handy and add HTML tags to selected text. What’s wonderful though is that the styling menu can be completely rewritten for Markdown. I probably won’t do this as I know my Markdown tags inside out. I might do it for adding a link as it’s very convenient to just Command-K. Just did it: adding command-K for Markdown link format took all of seventy seconds.

Creating an italics option was even easier, just adding one asterisk in each box.

The one disappointment is that there is no Markdown syntax highlighting. It’s not a huge issue for me as Markdown is human readable. There is an option for Markdown preview though which is very helpful (just found it while writing this review). 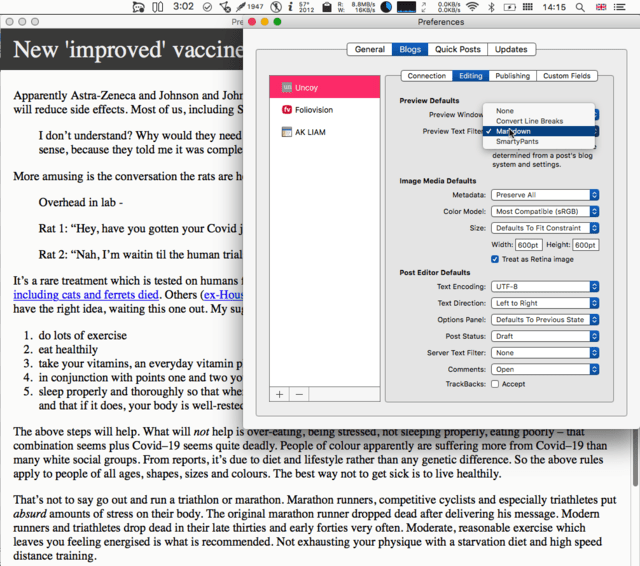 How to set up Markdown preview

In general, MarsEdit does not have a gorgeous interface in the preview window or even while editing (no syntax highlighting). 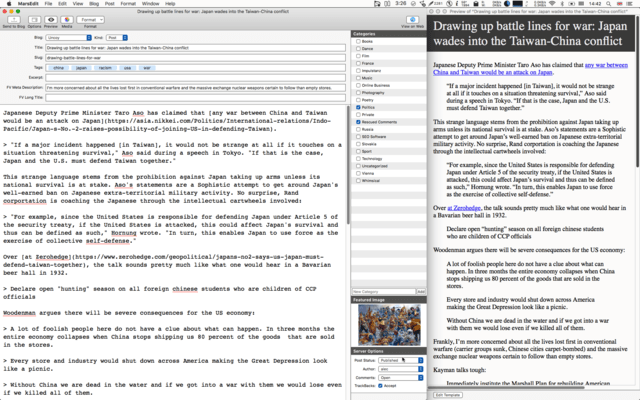 Edit Window beside a Preview Window

Here’s the blog management interface, which offers a list of websites, direct access to both pages and posts, along with a top menu with essential functionality: 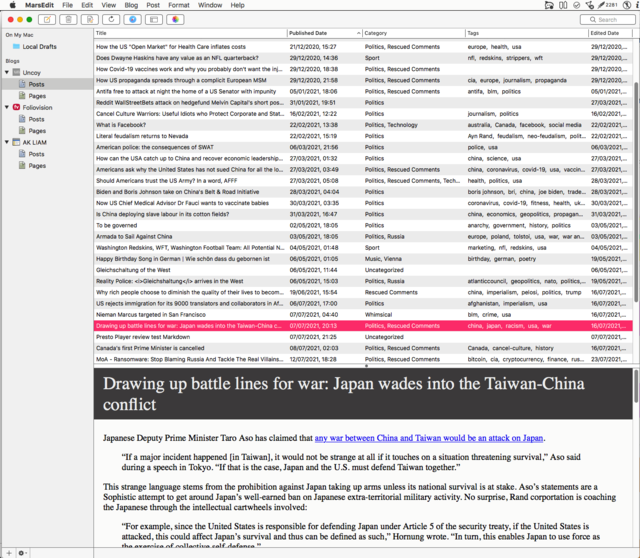 On the other hand, the interface is all business and since the editing is two-way, MarsEdit a great way to work more efficiently and quickly with a WordPress site or offline. What’s particularly striking about working with MarsEdit is how much faster it is to open and save posts than working through the WordPress web interface.

What is MarsEdit not suitable for? Posting photo galleries or posts with a lot of images. I’d highly suggest writing the bulk of a post and illustrating it later. Small figurative images which don’t require a lightbox should be fine.

It can be a headache to set up access to MarsEdit as well. XML-RPC is not without its flaws. Even now, I’m having some difficulty connecting to Foliovision.com which was working at one point.

Trouble hooking up a weblog is not uncommon

This is not the first time, I’ve had trouble hooking up a WordPress site to MarsEdit unfortunately. The bulk of the issues are with the XML-RPC protocol which has always suffered from security and reliability issues. It’s not so much MarsEdit as XML-RPC.

In this case, I suspect it’s because we’re running an older version of WordPress on Foliovision to ensure we stayed clear of Gutenberg for as long as possible. While we apply security updates, we also prefer to keep our sites stable and working. Fighting with the latest WordPress false starts is not productive. I’ll update Foliovision.com, as now that we have created Typewriter, and the brilliant Disable Gutenberg plugin exists, we can update. There’s enough technology on Foliovision.com, we need to put aside some time testing post-update.

WordPress.com offers a desktop app, which will probably work with .org sites but requires JetPack. No thanks. Actually it gets worse – on startup the WordPress app connects to Google Ads, DoubleClick, Facebook, Hotjar, Twitter Ads. This is not to mention outbrain, pinterest, gstatic. Hard to believe WordPress.com once had its roots in open source and freedom.

There are also WordPress mobile apps which kind of work but that’s the subject of a separate article. I haven’t found any alternatives for mobile, which makes me happy that we are back on Markdown editing, which is just possible via the web interface.