I decided to quickly put one up.  Alas, I can’t stand writing wikitext, it’s very slow. I can edit it on other people’s articles slowly and carefully. I wanted to write in Markdown so I did. It turns out there are no usable conversion tools. At first I was directed to Pandoc. We’ve got an online version which handles unlimited characters. I didn’t have much success with our version. I tried the official version. No luck there either. Other people were facing Markdown to wikitext Pandoc conversion issues as well.

This is the only one that has worked for me: https://foliovision.com/seo-tools/pandoc-online My use case was an HTML exported from EverNote which I needed to transfer into MediaWiki engine.

Thanks Paul Cik! It’s great to hear someone appreciated our hard work. In the end that’s what I used for my Mautic draft. Out of my Markdown editor, iAWriter I just copied HTML, pasted it into our Pandoc converter, chose HTML input and wikitext output. 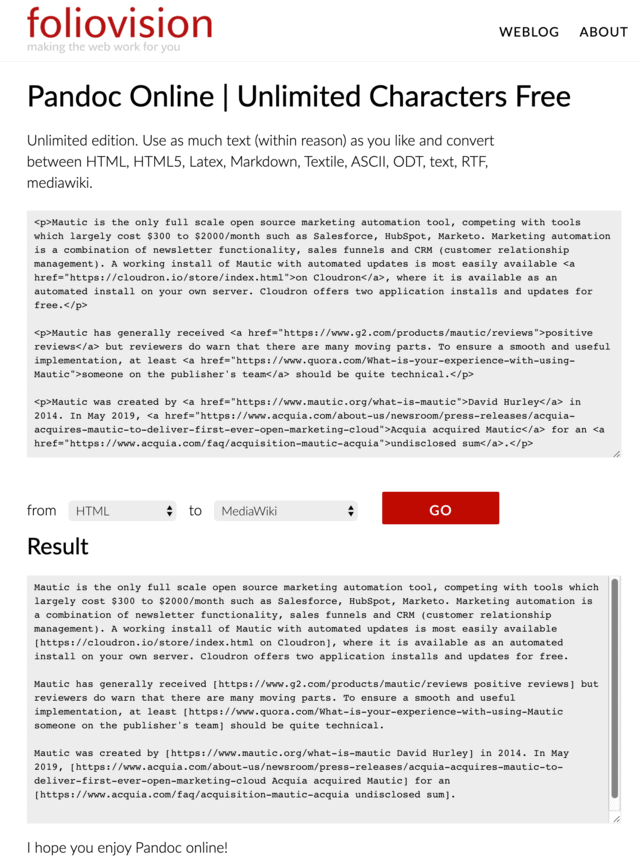 When I posted it to Wikipedia, the text looks like properly formatted wikipedia although the references are inline and not at the bottom. It’s been called Wiki-creole:

Jochen writes:
You can go from wikitext to html and then go from html to markdown. Not exactly straight forward, but i know no alternatives.

mivk answers:
Unfortunately, this is for WikiCreole. It doesn’t seem to work for MediaWiki markup. I have not yet found a reliable standalone Mediawiki to HTML-or-whatever converter.

Surely Wikipedia has automated tools to restyle the references. 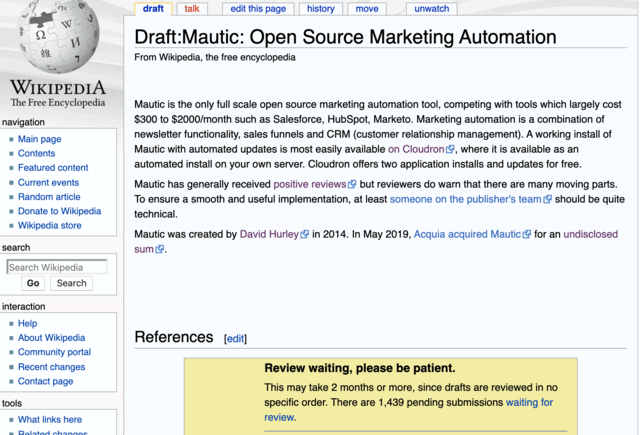 If anyone has any other suggestions on how to make writing for Wikipedia easier, let me know. I prefer to write/compose in Markdown so ideally the path would start with Markdown but I could imagine using a WYSIWYG editor with a code view, like old WordPerfect.

* Will we use Mautic this time? Probably not. The technical burden looks too high and what we really want is a very fast newsletter tool, more like Sendy. Unfortunately Sendy isn’t FOSS (although it’s mostly open source and it’s single fee). I’d be more than happy to make that $59 donation to Sendy but I’d prefer it be part of the FOSS world. Mailtrain is a bare bones newsletter tool which we’ll take a look at as it’s available on Cloudron but it looks too basic.