Many of you may know that Foliovision began as a client service agency and not a software company. Our first big service was migration from Typepad to WordPress. We were literally doing dozens of migrations a month at one point. Project management in bulk was essential to the premium client experience we wishes to offer.

We started with Basecamp but eventually outgrew it (there’s a long post about our Basecamp to Teamwork migration) and moved to Teamwork (back then TeamworkPM). Teamwork Projects at the time had a much worse design than Basecamp (latest version looks pretty good and even allows CSS customisation) but lots more tools (recurring tasks was a big one for us) at the time. As happy as the upgrade in features made us at the time, there was still one key feature missing. Later we called this feature Observer Status.

Why we needed Observer Status

When Foliovision grew as a service agency we faced one big issue. We worked in teams with supervising programmers on each project. It meant there could be as many as twenty-five of us on any given project. The ones we’d like the client to see included (sample):

The ones we didn’t want the client to see were the ones there to coach the roles above:

The reason we didn’t want the senior staff visible to the client was two-fold:

In the second case, if twenty or twenty-five of us in Foliovision had access to that project it meant an extra twenty three emails for us to process (only two people needed to know). We did our best to educate our clients not to do this with some success. About thirty percent of them started to behave better. Strangely the least important clients usually behaved the worst. It still meant ten or so false alarms per day which meant two-hundred extra emails to process/day spread out over our team. This unnecessary email noise had two consequences of its own:

Six hundred minutes per day is ten hours of work. That’s more than a full man-day lost almost every day. We’ve always prided ourselves on 1. delivering great rates at affordable prices and 2. rewarding our best performers really well. This email noise was affecting our ability to do both.

Teamwork were far, far too slow in implementing Observer Status which played a large role in persuading me to scale the size of our agency back down (changes in Slovak labour laws also played a big role). Without Observer Status, the amount of communication noise and stress on senior staff just became too much as we grew the agency. This is intended as a positive explanation of how much Observer Status helps us run Foliovision better now, so we won’t dwell on the issue.

How Observer Status Helped Us Run Our Projects Better

Observer Status put a quick end to the email noise. Now when we do a project, out of the dozen or so people on the project, the client can only view and contact three to five of us. Yet the other eight of us are there in case the junior or mid-tier expert needs help. If any of the senior Foliovision staff comment on a message thread or a task which the client can see, the client sees our comment and subsequent comments on that message thread or task go to the senior team member automatically as well.

Yet if the client creates a new message thread (on a side note, it remains very difficult to explain to clients when to use existing threads and when to start new ones – some get it and others never do) or task, the client won’t be able to notify Observers him or herself. This means that the client is automatically compelled to work with his/her team and not pull in the head of agency for every bagatelle (I just came back from WordCamp Paris, please forgive the gallicism). 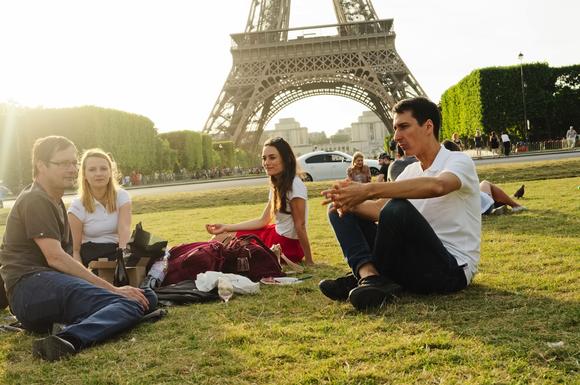 There’s more to life (even at Foliovision) than project management

You’d think clients would often complain about missing team members but they very rarely do. If they do, it’s usually just a quick question like this:

For some reason I don’t see Viktor when I’m setting up a new message.

To which our answer is pretty simple:

Viktor is working on your project as an advisor or technician only. Natalia is your project manager and she’ll bring Viktor into the conversation right away if he’s needed.

Thanks for the explanation. I’ll just notify Natalia then.

Observer Status is a comfort even for clients as they no longer have to decide which of a dozen or eighteen people to notify. Reply to all no longer does nearly as much damage (there’s usually only three to five people visible to the client: a project manager, a designer and a programmer). Even with the reply to all, fortunately Teamwork has taken steps to make it more difficult. Clients have to include each person one click at a time. The All option has been removed.  All remains for removing people though – which is a very helpful choice by Teamwork.com!

Here’s how it all looks. This is our team visible to one client (without observers): 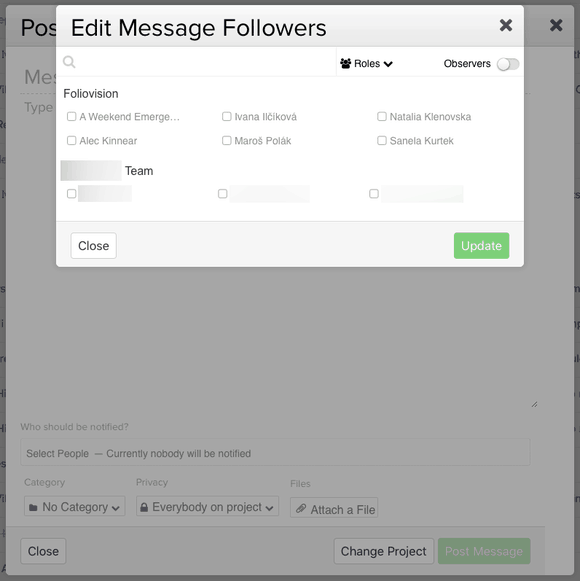 Here’s the full team available on this project (all observers visible: observers are have a slightly dark background): 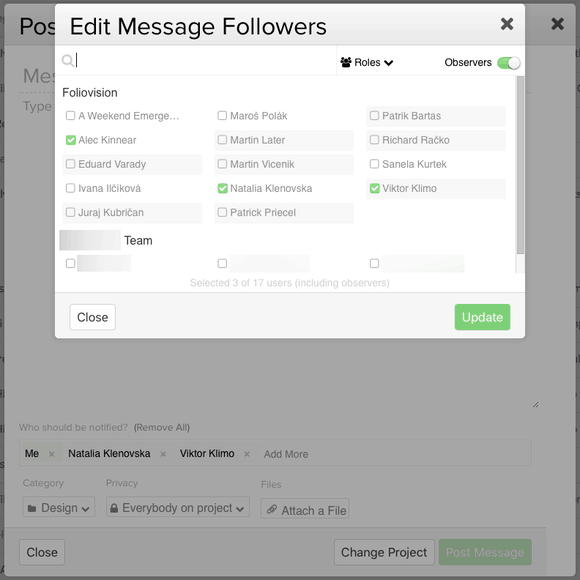 While I can only claim co-responsibility for killing the All option (there were others asking for that), Observer Status is a unique project management feature which Foliovision single-handedly pioneered. I am very grateful to Teamwork.com for implementing Observer Status to our mutually agreed specs (Daniel Mackey and I worked on them together). I was reminded of how great a feature Observer Status was this month when it was broken for about ten days, after a rewrite of the application logic.

Observer Status is working as it should again now (once an Observer participates on a thread s/he is visible to the client for the life of that message or task and doesn’t disappear again).

Would Your Agency benefit from Observer Status?

Teamwork.com‘s documentation about Observers is a bit dry so I hope this more detailed explanation of how Observer Status works and the history of the feature will help you run your own agency or projects more successfully. If you are running a mid-size agency or team or larger, Observer Status alone (and there’s lots of other reasons like white label on your own domain including Custom CSS, GANTT charts, built-in time tracking, many powerful integrations like the one with our accounting software Freshbooks and very reliable uptime) is a good reason to switch from whatever project management tool you are using now.

In fairness, if you are just a team of two to four people, Observer Status makes almost no sense (which is how we managed for five or six years on Basecamp when we were less than a dozen people). When your agency or team grows though, you’ll be very grateful that you chose to build your agency on software which anticipates and supports your growth. There’s three tiers of project management or CRM software: freelancer/small agency, mid-size agency and enterprise.

Teamwork Projects has the functionality required by the first two tiers covered perfectly. I can’t speak to the enterprise level, with hundreds of users. Meta-permissions (multiple super-admins) may not be covered well enough. As head of agency I do find I have to get more involved than I’d like in setting up admin and access level to each project. Consequently I have trouble imagining Elon Musk or Tim Cook enjoying setting up new Teamwork Projects for their thirty thousand or one hundred thousand employees. A software developer’s work is never done.