Building mobile versions of websites was an arcane art for a couple of years. And not all that necessary as only a minority of people had smart phones and even fewer of them were using them to actively browse the web. Over the last year as the devices get better and better, more and more visitors are using their smart phones to visit websites.

If you don’t already have a mobile version of your site, it’s time to put one in right now. Here’s how you do it, from A to Z. If the beginning seems a bit complicated, just push ahead. There’s an easy point form summary at the bottom of the article.

If you have even a reasonably busy WordPress site, you need to have a caching solution in place. Without caching, you’ll get your site kicked off shared hosting lickety-split or you’ll cripple performance on your VPS. Visitors like fast sites and cached sites are two to five times faster than uncached sites. For WordPress, there are three major choices in caching solutions: WP Super Cache, W3 Total Cache and Hyper Cache.

For a mobile site, you need to have a caching solution which will pass through mobile clients quickly and reliably to your mobile version.

Of the three above, by far the most reliable is WP Super Cache. Donncha O Caoimh has been providing reliable code (and an almost unspellable name) for five years now. (Donate here. We did.)

Hyper Cache seems to work
the new kid on the block,
showing promise. We’ve
had issues with Hyper Cache
on some of our bare bones
Debian server.

Start by making sure your caching plugin is properly set up. These settings are not the default but are where you want to be. Donncha includes the most compatible and much slower defaults in his plugin (good idea, as new WP users can get some benefits with little risk). Here are Donncha’s main instructions to get WP Super Cache to really fly and to reduce your load times for Google (good for SEO):

Now it’s time to get ready to set up the mobile version. First you need to make a choice on building your own mobile solution or starting with a mobile plugin. We recommend using a plugin as starting from scratch is a lot of busy work. There’s really not all that much room 320 x 240 pixels for creativity (the exception proves the rule guys) so you may as well set up something attractive and standard and business-like. There are a couple of good plugins out there to give you a running start.

Paid and very good but with some issues outside of Apple’s i-universe: WP Touch Pro. Here’s a WP Touch Pro feature chart (there is/was a free version as well).

Here’s a list to match WP Super Cache’s list of mobile user agents which you can copy and paste into the user agent theme preferences in WP Touch Pro.

If there’s a problem, all that will happen is that mobile user will get the standard site uncached.

Here’s the WP Touch Pro theme preferences where you should paste the user agents above: 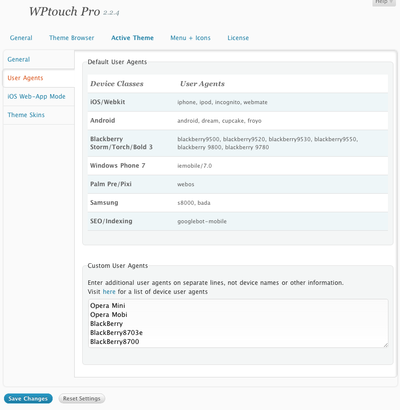 There’s some discussion about whether to give a full site or the mobile site to an underpowered device which can’t really handle the full WP Touch experience.

In principle these weak web browsers like Opera Mini 4 have special mobile modes to deal with standard sites, doing the reformatting themselves. But the reformatting will be easier if they are starting from WP Touch’s advanced mobile version.

The difference won’t be that great. 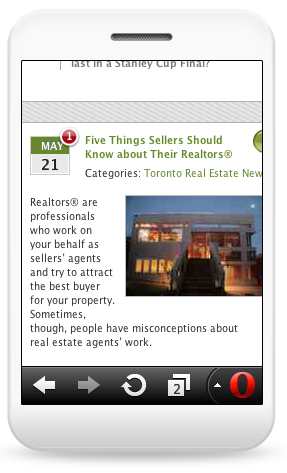 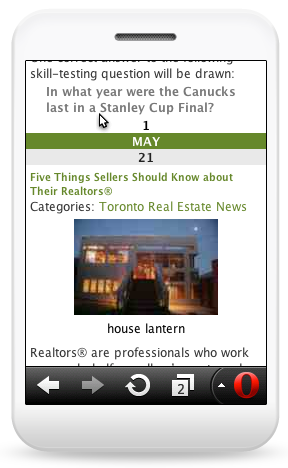 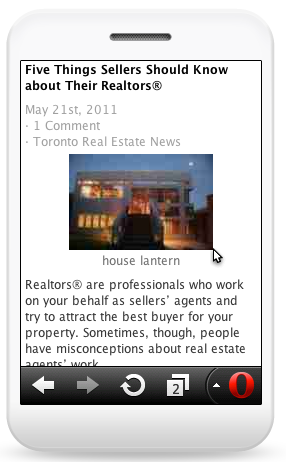 WP Super Cache handles mobile settings a bit differently than W3 Total Cache and Hyper Cache. WP Super Cache doesn’t let you hand in a list of mobile devices but generates it itself and puts it in .htaccess along with the basic rewrite rules. Here’s what the list looks like:

The advantage of this system is that it makes bypassing normal processing ultrafast (the movement happens at an OS level, rather than on invoking PHP).

It also means you as the end user don’t get to fiddle endlessly with what devices to include. You’ll have to count on Donna to choose the right ones.

Which it seems he does.

On the other end though, if you are using WP Touch Pro, you’ll have to give it a list of devices. Look out for versions under 2.2. The Skeleton template 1.0.8.1 does not handle blackberrys very well. Skeleton Template 1.2 definitely does, so if you’re having trouble, make sure to upgrade WP Touch Pro to the latest version and then update your template.

Both Hyper Cache and WP Super Cache have built in compatibility with WordPress Mobile Pack. If you haven’t already jumped on the WP Touch Pro bandwagon, WP Mobile Pack might be worth a try as it’s already fully integrated to two of the top cache plugins and free. Unfortunately, WPMP appears to have some compatibility issues and is not kept up to date. You’ll have to do some digging of your own to get it to work properly.

Once you are up and running, you’ll want to test your settings. Here are the easy tests. Opera has a desktop emulator for their advanced mobile browser and an online java version for Opera Mini.

Test for iPhone with Safari by enabling the developer menu and then reassigning user agent. On a Mac, I recommend Keyboard Maestro to set up a hot key on the menu command (usually application menu items can also be done in keyboard section but it’s a bit trickier). I’ve assigned command-U and it really speeds up testing for different user agents. You can also then use Safari to test for Blackberry user agents and other exotica.

Ideally you’d have at least a few real mobile devices with which to doublecheck your site. An iPod Touch is a great inexpensive stand-in for an iPhone/iOS. Opera Mini will install into most devices in parallel with the main browser. Make sure to navigate around to be sure everything is working.

When you know that your mobile versions are making it through you’ll want to sit down and have a think about what someone visiting your site on a mobile browser would want to see (insurance calculator, mortgage calculator, listings search, catalogue or weblog posts) and put those front and center. You might even want to remove large sections of your site which won’t display well on a mobile device from mobile navigation.

So to recap here are the steps.

How to Quickly Build a Great Mobile Version of Your Site