We use a lot of software at Foliovision. What we like are stable reliable solutions which deliver what they promise. What we hate is hypeware which overpromises and underdelivers. Often hypeware is delivered by companies which look for successful niches, clone the existing software (easy enough thanks to Matt Mullenweg's and Automattic's insistence that all code must be GPL). Cloned code is generally vastly inferior to the original (most often coded by a passionate coder with a deep understanding of the problem he is trying to solve).

What those copycat coders then do is market the heck out of "their" new product, often making sales where better code is available free or outselling a less expensive and better solution.

There are two companies which stand out as copycat coders. They are James Farmer's WPMU and Corey Miller's iThemes.

The original idea behind WPMU was not a bad one. Most plugins were coded for single site and therefore there was a huge need for expertise and plugins which would work on multisite networks.

What appeared to happen is that James Farmer wanted to bring every single kind of plugin under his roof, from membership plugins to newsletter plugins to ecommerce to antispam to social plugins to support plugins to ad plugins (to name just a few areas). With over 250 plugins, you can imagine the quality of the plugins.

Even worse than the original code is the support in most cases (the freelance plugin authors are run off their feet, didn't code the plugin well in the first place and have another dozen plugins to support). Apparently there are over 300,000 members (I'm not sure how many are paying and active, let's say 50K). Even with members paying between $100/year (the cheapest membership at 85% discount - if you don't sign up or renew, you'll eventually get this offer) and $500/year (about the most you can pay, although theoretically $600/year is possible), unlimited support on unlimited sites at those rates is simply not sustainable. I understand James Farmer well in this respect. It's why Foliovision charges for advanced support (we answer questions for our pro users free, but if we have to touch your code, it's extra) for our own FV Player Pro.

Basically a WPMUdev plugin is a dead end. But at least they are GPL so you can do what you want to with it. While the big plugins like membership and ecommerce just are not good enough (not best of breed and why would you use anything else), some of the smaller niche plugins can be useful and save your own developers half a day or a day of coding. One can even say for these niche plugins, some support is available which beats the WordPress.org repository in some cases (Mark Jaquith's Subscribe to Comments has been retired and the replacement open source Subscribe to Comments Reloaded is not updated fast enough or bullet proof enough for my taste so we've coded some fixes. I'm deliberately not counting predatory third party services like Jetpack or Postmatic or Disqus - there's no reason for a publisher to have to manage comments or comment subscriptions offsite).*

What WPMUdev does which is unconscionable and why we would never recommend WPMUdev to a WordPress service provider is stick a big fat marketing ad in your client's dashboard. As we do use WPMUdev code sometimes (before they started spamming all our clients), we have written a plugin to stop their marketing materials. If you are stuck using WPMUdev code, I'll attach it to this post for you to download next week and use on your own client sites to suppress their dashboard. We'll add it to the WordPress repository soon. 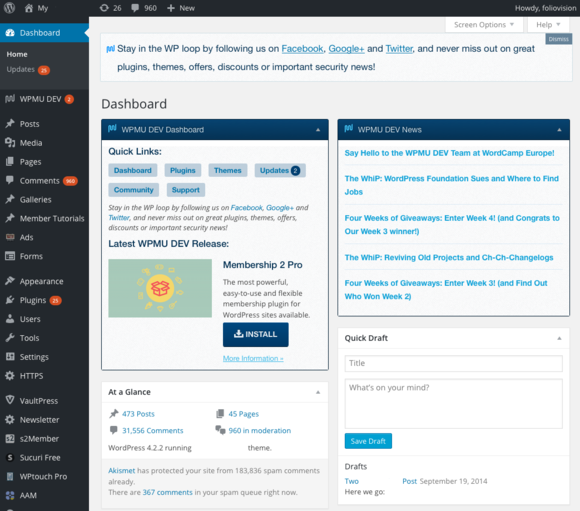 As you can see WPMUdev has intruded on your client's site with:

Some of the smaller niche plugins can be useful. It's a pity that WPMUdev are so full of themselves that they deface client sites. If you are not a large WP development company, I see little reason to invest even the $100/year (lowest rate) in a membership. At Foliovision's scale (we've built about a thousand sites and manage nearly 100), WPMUdev membership does (just) make sense for us as an extra resource. Our expectations are no longer very high.

Corey Miller's iThemes business model is a little bit different. Instead of taking on the WPMU niche with blanket coverage, iThemes approach is to find the most successful WordPress niches and get there with a usable product and a whole lot of marketing. Of course the right answer is great code and great marketing. If one has to choose, I far prefer great coding with adequate or even weak marketing to those selling second rate code. Great coders with both free and pro plugins who rarely release substandard code include Pippin Williamson of Pippin's plugins (Easy Digital Downloads, Restrict Content Pro), Justin Tadlock (Theme Hybrid), Stefano Lissa (Satollo Essential WordPress Plugins, Newsletter Pro) WP Ninjas (Ninja Forms), Swiftype (WordPress search only) or BraveNewCode (even if WP Touch Pro is more or less obsolete at this point (time to update to a responsive design theme comrades!). This is just a short illustrative list. There are many other dedicated coders working on the WordPress platform on the freemium model who deserve our support.

Here's who iThemes has gone after over the years:

It appears iThemes haven't had an original idea in their lives. Rather foolishly, we've been customers for a long time (for their pro plugin bundle). I believe iThemes were the first to bring to the WordPress community self-destructing plugins.

WordPress plugin authors soon learned that due to constant updates, plugin updates would be a lot of work and would require an ongoing revenue stream. License renewal became common practice for the wiser authors (rather than lifetime upgrades). Normal policy is for a plugin to just stop upgrading itself if the support license is not renewed. iThemes plugins act differently - even essential ones like backup. When your yearly license expires not only can you not install the plugin on new domains, it stops working completely on existing licensed sites. In additional, it posts extremely push notices into your dashboard and the top of your admin screen telling your client s/he is using unlicensed software (which for heaven's sake doesn't even work anymore).

What's worse, BackupBuddy fails on larger sites (even medium sized sites) and sometimes fails invisibly so it's worse than no coverage. The year we rolled out BackupBuddy was a year to regret. Our clients are long term serious publishers with huge archives. BackupBuddy failed more often than it worked. iThemes workaround were risible. We retreated to server level backups.

Most WordPress publishers don't have that option. What does work for backups and is one click install is Automattic's Vaultpress $5/month plan. Many of you know I don't care at all for Jetpack (or even overpriced Akismet) but standalone Vaultpress is a very good and very competitively priced service. Just make sure to choose the simple daily backup (you don't need hourly backup and if you do, you are probably pulling server level hourly backups already). If you don't want to send all your data to Automattic, BackWPup has your back for free (with competent paid support available), allowing you to choose your own backup destination. Here's another perspective on WordPress backup. Looking more closely, the more technical respondents are using Vaultpress or server level backups. There are several complaints about backup plugin (Vaultpress apart) reliability.

Apparently after the BackupBuddy fiasco, we hadn't learned our lesson yet, as we fell for iThemes siren song marketing for Sync. We'd been managing our hundred odd WordPress sites via our own tools. With the never ending updates we were gradually struggling to keep up with site administration. I believe we'd looked at ManageWP but the yearly fees (ManageWP pushes you into a two year contract to get decent rates) were pretty stiff (over $2000 for two years). iThemes Sync was just $300 at half price with a year's license. 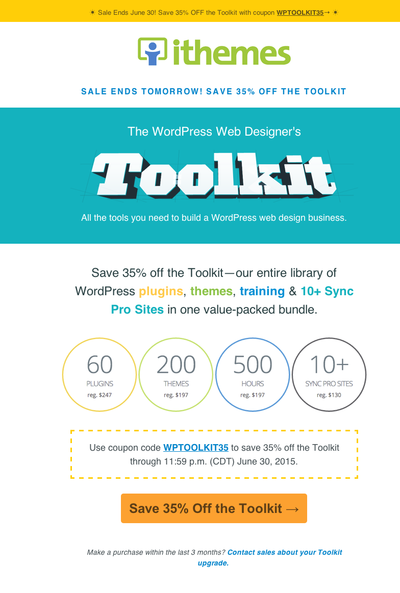 Alas with Sync we were unable to reliably update plugins. Sync has a great uptime service. Except that it sends all emails on first failure on a site by site basis. As most of us have large groups of sites on single services, it just requires a single hiccup to end up with forty emails in your inbox. One of our main hosts reboots their routers everyday in the early morning. Less than a minute downtime and means that the routers don't fail when you need them. It also means forty senseless emails in your inbox everyday.

Intelligent would not be a good word to describe iThemes Sync. iThemes  unable to give us a positive resolution of a single support ticket. Everything was impossible or too difficult (decent failure notices for instance).

Both MainWP and InfiniteWP offer free versions of their plugins which allow you to test them on your server. Both are well rated, although MainWP takes the nod in the most recent reviews. For the pro versions, both MainWP and InfiniteWP offer full bundles of extensions for $399. MainWP takes the edge though as they allow you to buy whatever extensions you want for your account. Here are our essential starter plugins:

The total bill was less than $100 for all of this power. We have also avoided the bundle as we don't want all the extensions active on our server (it's hard to avoid activating them all).

While MainWP was sluggish on Apache (lots of web applications are), MainWP has been very fast and easy to use as soon as we upgraded our backup server to paid Litespeed (not expensive for a VPS, about $350 - Litespeed support has never failed us either - a small price to pay for both performance and peace of mind). We'll be back to buy the MainWP backup extensions among others.

So in addition to ethical concerns, there are performance and support reasons to avoid copycat code. If you want both good code and good support, I recommend you go to see a specialist, whether it's for backup, security or site management. Probably the company owner will be a developer him/herself or at the very least, deeply engaged in his/her specialty area.

Particularly offensive about both WPMUdev and iThemes is how they feel that using their code gives their owners the right to hijack your client dashboards. Just on this basis, I would avoid using any of their products on a client website. The only place either of them show real innovation is new ways to hijack your client sites admin areas.

I cannot recommend either of the copycat coders here WPMUdev (though they run a pretty good weblog) or iThemes. I hope some of the alternatives I've suggested help you build and maintain better websites faster.

* While writing this post, I discovered Satollo has merged Comment Image and Comment Notifier into a single paid plugin called Comment Plus at just $9.95. We'll be trying this on our client sites for a more robust solution and not depending on a third party service (paid or not).