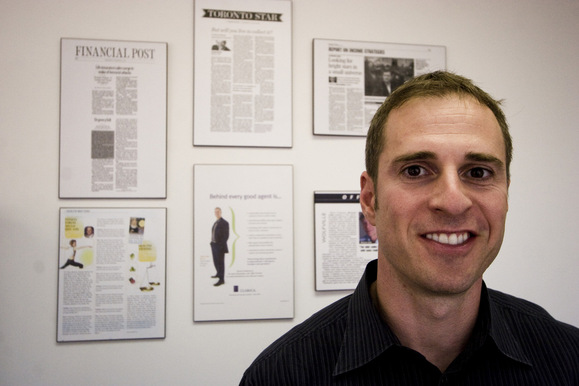 Lorne Marr  with some of his insurance awards and press clippings

Before opening up LSM, Marr had worked in the insurance business as a captive agent with MetLife since 1993. During his time at Metlife, Marr won many sales awards. In the early 2000’s, he decided he wanted to own his own office and be able to offer his clients a wider range of policies.

The big moment came in 2004, when Marr decided to start up his own agency, starting from scratch. From day one, Marr worked together with Foliovision, from choosing a domain name together and creating a corresponding logo.

Lorne Marr’s website, LSMinsurance was launched in 2005. “In those days “the online environment was completely different than it is today”, says Marr. “Insurance companies had sites but most were not pursuing internet business actively.” That made the starting situation easier for Foliovision and LSM, with only other brokers with whom to compete. For the first few months, pay per click advertisements were the core of the marketing strategy for LSMinsurance.

Kinnear warned Marr not to rely solely on paid ads as it made LSM completely dependent on ad prices:

“With online ads there was and is no barrier to entry. You walk up to the window, fork over your money and you’re in business. You could even copy your competitors ads if you liked. We mainly created original copy as our ads were more creative, but competitors often leaped on our successful strategies. Right away I told Lorne, we should move into the SEO side as soon as possible.”

Kinnear’s pithy paid advertisements proved to be a early and big win for both Foliovision and Lorne Marr. The immediate results helped Marr kickstart his business, hiring more brokers and also provided funding to steadily improve the website.

In late 2007, other insurance companies ramped up their online activity, more than doubling prices. With the increased cost of ads and greater competition, Lorne realised the time had come to shift to SEO.

For the first few years Foliovision wrote most of the content but eventually both sides decided it made more sense to train Marr up as the principal writer and editor-in-chief for in-depth insurance material. Today, Marr has a team of writers working on his ideas.

Today’s LSMinsurance.ca offers many guides, thorough articles written by professionals, as well as interviews with renowned insurance experts. Readers come back to the website to read new articles. “People today are much more engaged than they were at the time when the website was launched”, points out Marr. Interaction with them on the social media thus became an important part of LSM’s marketing strategy as well:

Apart from fresh high quality content, LSMinsurance.ca contains features and tools that make its visitors keep coming back year after year. The Income Tax Calculator, was introduced in February 2008. According to programmer Peter Baran, the calculator brings many repeat visitors to the site. The feature is always kept up-to-date, but its older versions are available as well. “It takes a lot of time and money to keep the calculator updated”, says Kinnear. The income tax calculator is very popular, however, so the time and the money are well spent. There’s even a Canadian Income Tax Calculator iPhone app on the way.

Additional popular features include the Canadian Insurance Companies Directory. “We are dedicated to providing the best directory of Canada’s insurance companies in the world”, says Kinnear. “But of course my personal favourite feature on the website remains the Help with Claims section.”

Over the years, there have been several visual iterations of the LSM Insurance website. Version one was a quite sober white and blue affair, designed to look its best on 800 pixel wide monitors. In spring 2008, it was time to update to something a bit flashier and web 2.0. Italian designer Matteo Rattoti flew in to Bratislava work with Foliovision for a few weeks on a sleek silver and grey and blue look which lasted until summer 2012.

The current logo with the tagline “Just the insurance you need” was created in 2008.

Lorne Marr’s new LSM insurance logo 2008: quite an improvement
this logo is still in use on the most recent 2012 design

“We always try to be forward looking with our designs. Four years is pretty good run for a website,” says Kinnear. With the large amount of content and many tools and features, LSMinsurance.ca had started to look like a sales website. According to Kinnear, “In the insurance business, and generally in the financial business, you do not want to look like you are selling something.”

The current design is far from looking overcrowded. “The new site is focused on readability and information. It could easily pass as a website of a hospital or of a government,” notes Foliovision art director and co-creator of the new look Michala Lipkova. 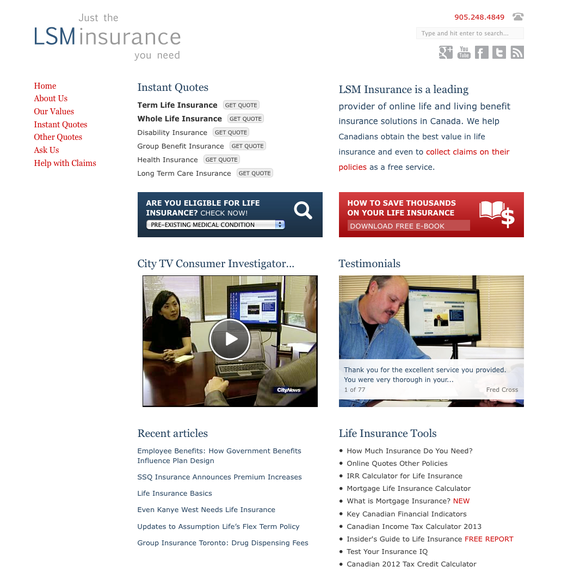 LSMinsurance.ca has earned a great reputation, with Marr and LSMinsurance regularly cited in mainstream media like CityTV, The Globe and Mail and Toronto Star. A simple way to measure the success of the Foliovision-LSMinsurance.ca collaboration is via traffic numbers.

In the first full year of the website 2006, 94,477 unique visits were recorded. For a new website, that is not bad at all. Pay per click ads clearly did their job very well. However, due to growing online competition and increase in the price of paid advertising, the numbers went down in 2007. *Since the strategy has shifted towards SEO and high-quality content, unique visits have only risen over time. In January 2008, the number of visits was 7,978. Six months later (and five months after the income tax calculator was introduced), monthly visits had tripled to 22,868.

Over the years, Foliovision’s role in Lorne Marr’s business has steadily changed. Initially, Kinnear and the Foliovision team mainly worked on the marketing side. Now Foliovision primarily provides web development and programming, as Marr is now able to manage the content and marketing part of his site himself. Marr has understood that quality content is the key to his site’s success and goes to great lengths to provide the very best: “I subscribe to numerous industry journals, finance magazines, and follow websites in the US or the UK to get inspiration.”

In the case of LSM Insurance, Foliovision has helped Marr to build, run and continue to improve a multimillion-dollar business. One of Foliovision’s goals is not just to provide services but to coach its clients to be able to be able to do more for themselves. Kinnear insists business owners should be actively involved in their own website strategy: “Nobody knows your business better than you do. Working with Lorne has helped me too. Lorne is persistent and patient when pushing through projects. Over time, I’ve acquired some of his own patience and persistence which has stood Foliovision in good stead as we too grow.”

What does the future hold? With Foliovision by his side, Lorne Marr’s main goals are focused on the visitor: “I will keep looking for the innovative ideas which improve consumers’ experience.”