I’ve just spent an hour helping a client get set up with secondary addresses in Gmail within Apple Mail. She’s tried and failed to get Apple Mail to work reliably enough for her taste on vanilla IMAP. Our own four full articles on the idiosyncracies of Apple Mail IMAP support her point:

Just as we got to the goal line, B. asked me about setting up Mail on the iPad to work with secondary addresses in Gmail. 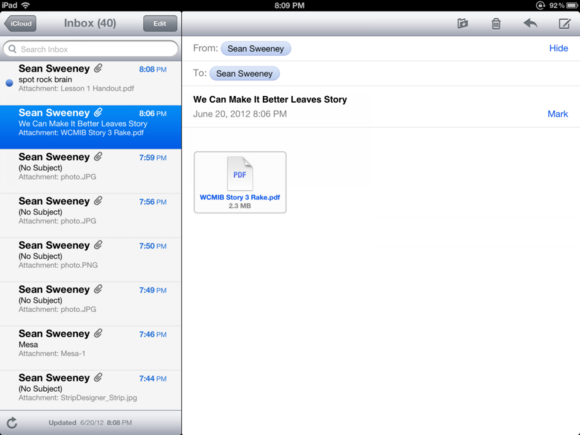 Apple Mail iPad 2012 (screenshot Speedtechie): Looks like Apple OS X Mail
but under the hood it’s not the same at all: troubleshooting ahead

After you’ve done all of the above, go to the settings for your mail account. Under ‘IMAP Account Information,’ you’ll see a field called ‘Email.’ It will have your Gmail address in it. To add more send-as addresses, all you have to do is put a comma-separated list of addresses into that field. The problem is, you can’t type commas into that field.

So tap on the ‘Email’ field, copy the email address to the clipboard, and go to the Notes app or something. Paste it there, and then type all the email addresses you want to send from in the order you’d like to see them, separated by a comma and a space, like so: example@gmail.com, example@work.com, example@sideproject.net. Then copy that whole list, go back to your email settings, and paste the whole thing into that ‘Email’ field.

Next time you send a message, you’ll see a drop-down menu that lets you pick which address from which you want to send.

This little episode makes me so very glad I don’t really have an iPad (we do have a shared one for testing websites at Foliovision). My ultraportable device is an 11″ MacBook Air. I’m much happier with anything with a real keyboard (including my HTC Desire Z telephone). Typing is a bit part of my life and there’s nothing worse than a virtual keyboard (and yes I did own an iPhone 3GS for three months and was so happy to give it away to my GF).

Outside of the keyboard, the other big advantage to having the MacBook Air instead of an iPad is it means I can avoid the whole iOS ecosystem and having to buy/install/maintain/curate/learn applications for a second platform.

I don’t yet use Linux as a primary working system as my experiments with having a Windows computer on call and/or using Linux for work is that my efficiency dropped so radically when off Apple (think 50% or more) that literally I can’t afford to use anything else. Foliovision can’t afford to have me work with anything else.

Of course my productivity would eventually recover, about half of it at about two months and the rest over six months to eight months. But we are talking about tens of thousands of dollars to have me switch OS.

I get along with my Android telephone by using the built-in applications (email, web browser) which are good enough and very similar to Mac OS X actually. I don’t have to jailbreak or even set up an account (as you can imagine I refuse to associate my telephone with my Google ID and Google has ways to figure out your duplicate ID’s easily enough: it’s a fairly trivial and amusing intelligence game for them to figure out how to do it – if you refuse all their services and location services you make it at least a bit challenging for them, although they probably have a file of my mobile search history which would be easily enough coreferenced with my desktop search to be able to figure out who I am – searches for porgy and bess jazz club and staatsoper for example or even just the referrers from those sites when I come in to search for something else).

So by being on just speaking terms (pardon the pun) with my Android telephone, I effectively am on a single platform. I’ve also refused to upgrade any of my/our computers past Snow Leopard (also saving lots of problems at work and for myself). There’s a test install of Mountain Lion on my MacBook Pros (the 2011 i7) for real time video effects when video editing. The time I’ve lost tweaking and Mountain Lion well enough to get any work done at all on that install only proved my point.

American businesses figured this out for a decade when they consolidated on Windows XP and didn’t upgrade the OS. It’s in Apple and Microsoft’s interests for us to upgrade and change regularly. The problem is that the desktop OS paradigm has more or less been solved for ten years (on OS X from about 10.3 and really, truly from 10.5). So we are being sold bells and whistles, the same way the automobile has been solved for a good twenty-five years – at the very least from when fuel efficient models hit the marketplace).

And this is what is so stupid about Linux desktops: over the last three or four years all of the major desktops have been turning somersaults to radically change their desktop application (Gnome 2 to 3 and KDE 3 to 4 and Ubuntu to Unity). How on earth can anyone get any work done when the whole place is turned upside down every couple of years?

For the highest efficiency try not to get dragged into new OS and onto unnecessary platforms.

On Friday, our senior programmer and Peter we were talking about the primary reasons that Foliovision is quite successful (we’re not Facebook, but we’re improving every year) outside of the people themselves: it turns out to be that consistency in IT plays a large part.

We picked one programming language (PHP), one platform (WordPress) and don’t look much left or right from there (we’ll code special projects like AWS or inventory systems which integrate into WordPress, we do migrations to and from Moveable Type, Drupal, Joomla).

Internal software was consolidated on a Basecamp/Freshbooks workflow and we don’t change that either (although we do incrementally improve our routines every month and we programmed our own addons to fill in the holes in the existing software). Our desktops are Apple 10.5 and Windows XP. I think long and hard before bringing in any new tech and take care to choose right in the first place.

IT is a minefield. The big vendors are not on our side anymore (I do think there were about ten years where Apple did really value the few people still left using their OS and hardware which ended with the introduction and success of the iPhone). Our client B. above had her own experience an Amazon web store and constantly moving goalposts. We were able to solve her issues but Amazon made it as hard as humanly possible.

KISS is the golden IT rule.

Do NOT buy a netbook. Do NOT buy a tablet (iPad or Android). Do NOT get too involved with your smart phone. Do learn your core OS and your core software inside out. Keep your thought cycles for questions which matter.