If you don’t know about this, here’s a great Google tip. Change your search settings to allow 100 search results. It’s much easier to go through a lot of search results when they are on a single page than to go through ten at a time. Google has some very good compression so loading 100 results doesn’t take much more time than loading 10.

One of our principal areas of business at Foliovision is SEO. So when I upgraded to Apple’s Snow Leopard on my main work computer (I only upgraded since Leopard 10.5 won’t run on a Macbook Air 11″: still prefer Leopard and its quiet reliability), I was horrified to see that I could only get 10 search results from Google in both Safari and Omniweb.

So I thought the problem was with Safari 5 or webkit as Snow Leopard forces an upgrade to Safari 5. I tried the latest version of OmniWeb. Same issue. Impossible to get 100 results. Now I was really unhappy. My work life was about to become miserable rooting through Google search results ten at a time.

I had just installed Chromium* to see how it compares in memory usage with a lot of tabs open as I have just dropped from 8 GB of RAM to 4 GB of RAM and was feeling the pinch. Safari 5 uses a lot of memory with 40 tabs open – what is disappointing is that when you close all the tabs, Safari hangs onto a lot of the memory. Chrome creates a separate mini-application for each tab using even more memory than Safari but when you close a tab it gives back all of its meemory.

So I decided to run the Google results test on Chromium. No problem to get 100 results with Google Chromium. 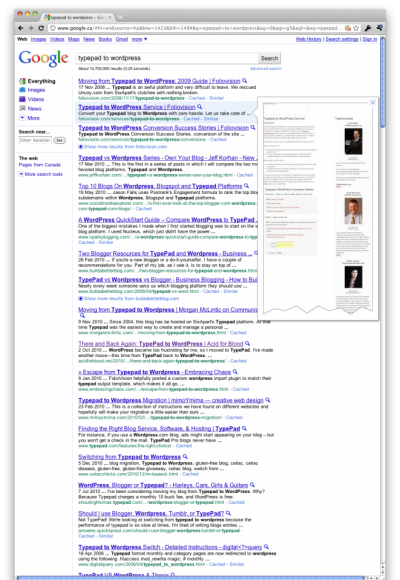 Considerably more research alerted me to a solution: turn off Google instant in Google’s settings and Safari would yield 100 results again.

Strangely I could get 100 results with Google instant on Google’s Chromium, the open source version of Google Chrome. So the issue is not with compatibility between 100 results and instant (I thought perhaps it was a bandwidth issue).

It looks more like a deliberate crippling of Safari and Omniweb to give Chrome a leg up in the Apple browser wars. Even more diabolical, you have to save your settings twice in Safari after turning off Google Instant to get your 100 setting back.

Google wins our Microsoft Embrace-Extend-Extinguish award of the month for their attack on Safari and other webkit browsers.

* Note: Don’t ever use Google Chrome, it’s spyware which will not even run without an admin level updater application on your computer! Get the latest build for Chromium for OS X here: cherish that direct link, Google hides it.