Every time I use my Apple computers, it becomes more and more apparent that Steve Jobs has wholly sold out user’s privacy. Publicly Jobs denies privacy violations:

We’ve always had a very different view of privacy than some of our colleagues in the [Silicon] Valley. We take privacy extremely seriously…. A lot of people in the Valley think we’re really old-fashioned about this…Privacy means people know what they’re signing up for, in plain English and repeatedly…. let them know precisely what you’re going to do with their data. That’s what we think.

But use of an Apple computer on the ground suggests differently. 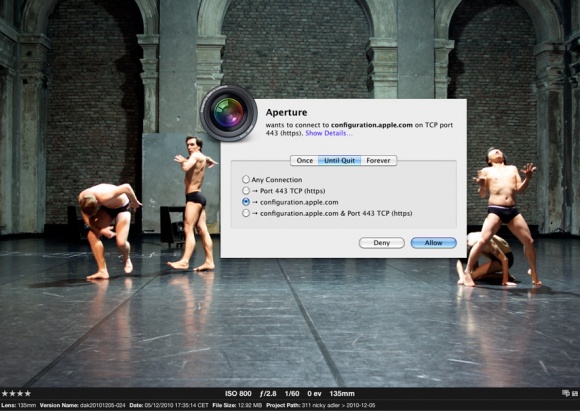 Let’s start with a simple example from a pro app: Apple’s Aperture goes after configuration.apple.com every time even with all web checkboxes turned off. l.google.com (location for Google) is understandable if you are using Aperture’s built-in geo location services. But not if you have it turned off as I do.

I’m not the first one to find Apple’s monitoring of our use of their apps disturbing. The issue of iLife ’06 phoning home was a sore spot as far back as 2006. What goes on with iPhones with individual apps tracking every use along with your unique iPhone ID and your Facebook profile is astonishing.

But with the pro apps for which we are paying hundreds of dollars, one would think that one had more than paid for the right to privacy.

What is even more disturbing is that with a virgin Little Snitch install, almost all Apple servers and services are considered safe and permitted out of the box. Why does Objective Development implicitly trust Apple? Moreover, there is nothing to prevent Apple from engineering around Little Snitch and Apple has certainly done so.

I am slowly becoming convinced that there are back doors into even our fruity and once alternative Apple computers. I wonder if user tracking was a deal Apple signed with the devil to be given free road in telecommunications. For decades, Microsoft has taken the side of the US government and security institutions against users. There are hidden files on Windows computers which log all your internet visits and emails in plain text. Very handy for law enforcement. Here’s what one IT professional’s experience:

Internet history, documents and all sorts of potentially sensitive data is cached as well. When recovering documents for users I’ve found copies of those documents in some really strange places. The user was just glad I recovered some or all of their lost work. I just sat there scratching my head as to why there was a copy there and not in the normal temp dir where you’d think such files would be kept. Varies from version to version as to where those things turn up.

If this doesn’t worry you as a US citizen, take a closer look at the supervisory protection offered by your courts. No requests for wiretaps were turned down in 2009 out of 2,376. These are only the visible wiretaps and not the secret ones rubber stamped behind closed doors. That none were turned down suggests that US law enforcement is not being supervised by the courts. It’s the same as all students getting A+ on their exams.

The Obama administration is openly insisting on unrestricted access to all online communication. Governments all over the world and most notably the UK have enacted laws to force you to reveal the key to any encrypted data with penalties of up to two years in jail. In the case of the UK, even the assessment of taxes or any charge payable to a government department justifies invoking RIPA. The list of agencies who are allowed to invoke the act is forty or more and includes local councils including fire authorities and the Charity Commission.

There is perhaps nowhere where your data is less secure than the UK. Basically if you are travelling to Britain, you’d best take a laptop with next to no information on it: just the bare minimum to access your email.  You are free to complain to the Investigatory Powers Tribunal about inappropriate use of surveillance authority under RIPA. In ten years, 956 complaints were registered: only 4 were upheld. Again, the case of all students receiving A+. Those grades don’t tally well with the five law enforcement officers jailed for running illegal surveillance networks using RIPA means to ill ends.

If you want to sift through communications in bulk, it’s only going to be feasible with a systemic backdoor.

Apple is doing their share in providing those backdoors and detailed tracking of its users. It does no harm that the data they are collecting on consumers gives them enormous power in the marketplace. So not only do they get favours from the powers to be, they make money to. Plutocratic oligarchy at its best.

What is Apple doing with all its loot? Spending it on filing more patents. The spurious patent strongbox of Apple is filled like a pirate’s chest.

Google is no better than Apple and probably worse. So as a computer user, you have three commercial choices of whom to trust with access to your data:

No matter where you turn, you are compromised before you leave the gate, easily trackable at every moment online and with your cellphone. You are always in the matrix.

Google’s Chrome browser installs invasive tools by default that check in with Google on every run, ostensibly looking for updates. A more privacy aware open source version of Chrome called Chromium exists for Mac OS X in nightly builds no less. For some reason Google hides those builds on their Chromium public pages, only offering instructions on how to build the damn browser from scratch.

It’s looking more and more like Linux is our only option if we want to retain our privacy. I’m surprised to see Steve Jobs sell out like this. I suppose he’d call it pragmatism. I’d suggest it’s betrayal.

If I decide to stop using Apple computers, that’s 5 personal computers down and ten more company computers. I think it’s time someone took the bull by the horns and started producing sanitisers for of OS X which shut down all of this phoning home with a combination of Little Snitch behaviour and automated creation of hosts files, with regular monitoring and testing of other backdoors. The task is very onerous as Apple can always enclose special keys or particular data in encrypted files. The only way to prevent your computer being compromised is to allow no outgoing communication at all without your assent and a minimum at that.

Particularly vulnerable is Mobile Me. With Mobile Me, you are able to share Mail, Contacts, Calendar and control your computer remotely depending on what options you enable. Presumably Mobile Me communicates all of the requisite information, whether you turn on selected services or not. So once you’ve used Mobile Me even once, US authorities have full access to all of your computers.

I had to help my own sister with her Mac. The only system which worked reliably to access her Mac and help her with it was Mobile Me. Mobile Me was a blessing to be able to get her new Macbook Pro working just right. On the other hand, signing up and enabling some of its features on my own computers probably compromised decades of relatively secure computing practices.

One of the reasons that Microsoft got away from its antitrust case after an initial guilty verdict are their ties with national security in the US. The cost to national security by breaking down the computer OS monopoly were considered larger than the gain by enforcing anti-monopoly and antitrust legislation. The backdoors and collaboration with national security were Microsoft’s get-out-of-jail card. Google plays the same card and thus can break privacy and copyright laws with relative impunity.

Steve Jobs is no fool. Having seen competitor one thrive and survive via collaboration (Microsoft) and seen competitor two burst from zero to exceed Apple’s market capitalisation earned over decades in just a few short years (Google) via such collaboration, there’s just no way the gentleman feels in a position to protect users.

On the other hand, Apple users are said to be wealthier and better educated than Windows users. Surely one day we’ll be smart enough to realise we’ve been had and we are all sailing in boats with sieve ridden hulls.

Ironically, these backdoors can help to protect the innocent. In one case, the surveillance backdoors on the iPhone saved an innocent man from 5 consecutive sentences of 14 years on false rape charges. But the exception proves the rule. We are under more and more tacit surveillance using our Apple phones and computers.

What could Apple do to reengender trust among its users? Remove any calls to its servers without explicit authorisation from the OS or their own applications. For those who want a simpler experience, give them a global security setting which means something. Something like three simple options:

Sooner or later if you value your privacy, a permanent exile in the Antarctic icecap with the other penguins looms. For political activists, Linux should be de rigeur as the starting OS. It’s a little difficult for me at this point with decades now invested in expertise and productivity on Apple computers. I own and use dozens of great OS X only shareware programs as well as commercial graphics and video applications like Aperture, Photoshop and Final Cut Pro for which there are no adequate equivalents at the South Pole.

It’s looking like a second computer is in line now for just private writing and private life. Even if you can’t leave behind Microsoft, Google and Apple for your business life, you should get a second machine Linux machine which never goes online. Even an Apple computer would be fine, as long as you never ever plug it in. The recommendation is epoxy for the networking ports which include Ethernet and Firewire and removal of wireless functionality. DHCP is just too easy and tempting. You’ll need to hold on to USB for backups.