I’ve been working in WordPress for a long time. The original impetus behind the creation of WordPress was a free alternative to Movable Type, after SixApart introduced $299/website pricing for their version 3.0 in 2004. Most webloggers at that time were fairly techy and most sites were personal weblogs (they’d be considered mixed now), so right away they fled to b2 which quickly was forked to WordPress by Matt Mullenweg and Mike Little (in the right place at the right time). Mike Little’s a very personable guy who truly believes in open source and sharing. Matt Mullenweg is the CEO of Automattic who have taken $617 million in venture capital, the publisher of WP Tavern (the main WordPress news site). He’s also owner of WooCommerce, which was more or less stolen from the original publishers by WooThemes, making Mullenweg effectively the buyer of stolen goods (as Mullenweg paid Woo but not the original publishers when he acquired WooCommerce for $2.1 million).

I’m bringing up the open source and FOSS origins of WordPress and the money currently involved, as it really offers some perspective on what happened to little SixApart. Removing the free personal option from Movable Type, an outstanding static publishing system, changed both SixApart’s fortunes and the technology of the web. Movable Type sites are much easier to harden against hacking as there was much less live code.

But that’s all water under the bridge.

Free was the original promise of WordPress which won it the hearts, sites and free labour from the weblogging and web publishing universe. The idea at that time is that we would collectively pool our innovation and code to build a better publishing system.

Where was the money supposed to come from? Service fees. Most companies and webloggers could not implement advanced websites on their own. With a rich pool of shared free code, we could all prosper by serving publishers and small companies. This could have worked before the VC money entered the WordPress universe. VC money needs big returns which requires products and services with high margins.

Most WordPress software publishers long ago eliminated their unlimited agency tier. Foliovision never offered unlimited licenses as unlimited effectively cripples any ability to sell or restrict one’s software. A big webhost or platform host buys a single license at $499 and own your software and all its updates. Totally unfair as a boutique agency with twenty clients will have to pay the same $499. It’s not that we’re against bulk licensing: we’ve offered license packages as high as 100 seats. I believe our current limit is twenty but it’s possible to negotiate custom packages, depending on the kind of support a customer’s network will need and the kind of publishing they do. It’s likely that an online arts collective with a few hundred members would enjoy preferable pricing to that which we would charge a successful adult entertainment business. Our goal is to make advanced video technology accessible to more publishers, not to subsidise large publishers.

While talking about software licenses, let’s talk about renewal fees. Automattic together with Yoast have pioneered a new method of consumer exploitation. When a publisher or an agency buys a Yoast or WooCommerce license, renewals are at 100%. Originally WordPress plugin publishers were expected to offer a one-time license with unlimited updates. Apple’s current app store still works on that model. For an app to obtain renewal fees from its users, the app builder is required to release a completely new version. Pixelmator turned its already pro version into Pixelmator Pro in order to be able to charge its customers again. What would have been better is a discounted upgrade.

Unlimited upgrades are clearly not sustainable. In my experience, the honourable way to go is to charge an initial license fee of say $75. That license fee covers one year of free updates and email support. Those who continue to subscribe to updates and support get subsequent years at 60% off with an interrupted subscription. Those original licensed purchasers who let their support and updates lapse are able to buy in at 30% off. A simpler version of the same system is to allow existing license holders to renew updates and email support for 50% or even 30% off.

Sadly a new normal has been imposed on what was once a real community: full price licenses every year. Basically any publisher who buys into the open source WooCommerce, Yoast, GravityForms or even until recently EDD system (more on Sandhills Development and their positive journey back to small agency friendly sustainable pricing another time).

What I find shocking about Automattic and Yoast’s pricing is that e-commerce systems and are relatively static in comparison to video publishing (which radically changes with each iOS and each Android version, each of which drop once per year). Carl Hancock’s cashgrab at GravityForms really shocks me as well. For many years, Hancock was sitting on a huge cashcow as the only viable pro forms plugin in the WordPress ecosphere. His pricing model was very fair. For $250 an agency could buy into the full Gravity Forms system and plugins on unlimited sites for free. After paying the initial license fee renewals of support and updates were a flat $100/year. Extremely sustainable and not a worry.

How does it work for Hancock’s RocketGenius? We’ve used Gravity Forms support perhaps three times in nine years since initially subscribing. Basically the extra $900 is free money for him. But now he requires full annual payment as if for a new license for renewal. This is not what I signed up for when I volunteered my time and my developers’ time to work on WordPress and WordPress plugins for free. It’s a cabal of greedy companies, the most important of whom are in deep debt to VC money, trying to exploit a naive developer pool to work for free while screwing customers out of higher and higher sums annually just to keep their sites running.

How did this happen? I blame Joost de Valk for bringing this marketing first, exploit the customer mentality to the WordPress community. Matt Mullenweg has always had a tendency to go the easy way and take the easy money. de Valk with his $269/site annually Yoast plugin showed him how to crowbar a customer’s wallet when the customer was down. de Valk also brought other new techniques to the WordPress world, such as removing features from free versions (with v3) to hijacking the admin interface to run ads and compensated plugin reviews (if for nothing else to stop endless “rate Yoast” interruptions). I forgot to mention corrupting moderators and installing his own people in WordPress support forums to run interference for him. Oh and refusing to offer any support at all to free users in the WordPress forums or anywhere else.

This is all background to an ad I’ve just received in my email from Flywheel. Flywheel is openly recommending that WordPress design agencies charge $599/month for WordPress updates: 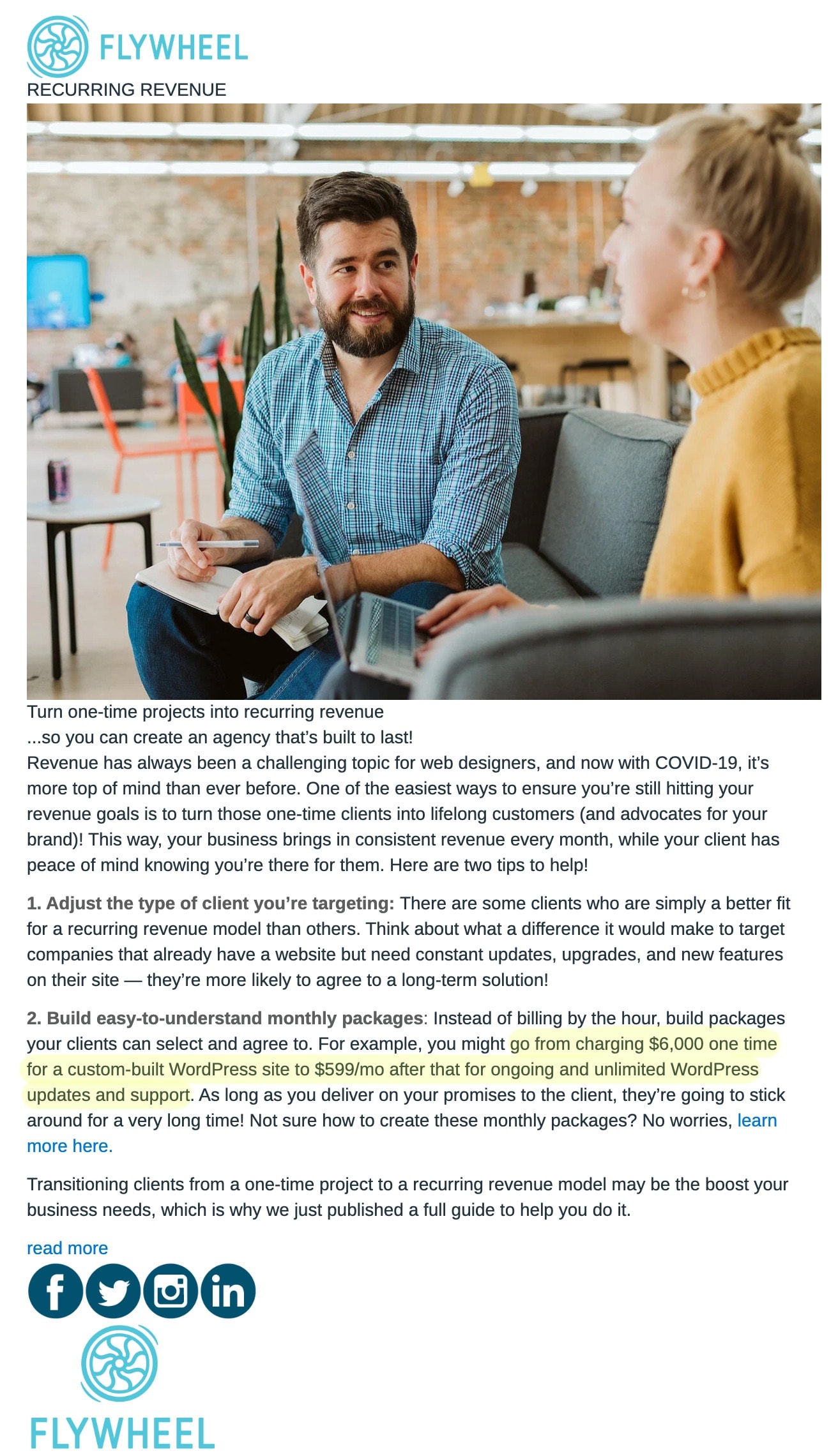 No wonder based on WP Engine hosting pricing (I’m not sure if Flywheel has moved their pricing to WP Engine levels, the original Flywheel offer before the sale to WP Engine was a fair offer and quite useful to end users or small agencies without much programming expertise although not well-suited to sites with substantial custom programming), Flywheel would recommend very high monthly retainers. Hosting alone will consume a quarter to a third of that $599/month retainer. It looks to me like this is a separate offer from hosting so that’s just $599/month to update WordPress and make very small tweaks to a site.

So is WordPress free? No, according to the largest dedicated WordPress host on planet earth (WP Engine/Flywheel), WordPress costs $599/month.

Those unlimited Wix (€25/month), Squarespace (€24/month), Shopify ($29/month or $79/month), Typepad ($15/month until Endurance/Bluehost recently disappeared it), Weebly (€20/month). All of the pricing above includes all of weblogs, websites and ecommerce, apart from Typepad who never offered ecommerce.

WordPress does still have its place. Here’s four reasons why:

So who should use WordPress then?

The latter group is where we step in. We build advanced video membership sites, where we are capable of duplicating most of Netflix’s functionality in an open-source system for $20,000. We also build high traffic membership sites with advanced membership and affiliate features. Our own pricing model these days is mostly zero charge for hosting while we charge for custom development and ad-hoc for support and updates. We keep our clients away from stiff monthly charges when no changes are made by running their WordPress sites on security updates for a year to two years at a time with no major version upgrades. It’s amazing how smoothly a WordPress site will run if one stays away from major versions upgrades without nightmare beta-software like the Gutenberg Editor to mystify your writers and editors and break your site.

Who should avoid the $599/month WordPress CMS?

I hope these notes help you better understand what WordPress offers and does not offer to individuals and companies. This is not a drive-by web post. I’ve spent fourteen years working on and around WordPress. This is the reality from the trenches.

* Believe it or not, we often still prefer to run the fully open source and free Filled In for very simpler or very sophisticated forms as it doesn’t slow down a site and it’s more customisable). But for forms which require what GravityForms or its plugins offer, it’s a real time saver.