Let’s start with Medium Login. What user hating, social media centric tool ever dreamed up temporary sign in via email? If you want to log in to Medium via your email, you can’t do it with email and password. You have to send a new email to yourself (which takes somewhere between 30 seconds and two minutes to arrive) and click on the link within 15 minutes. 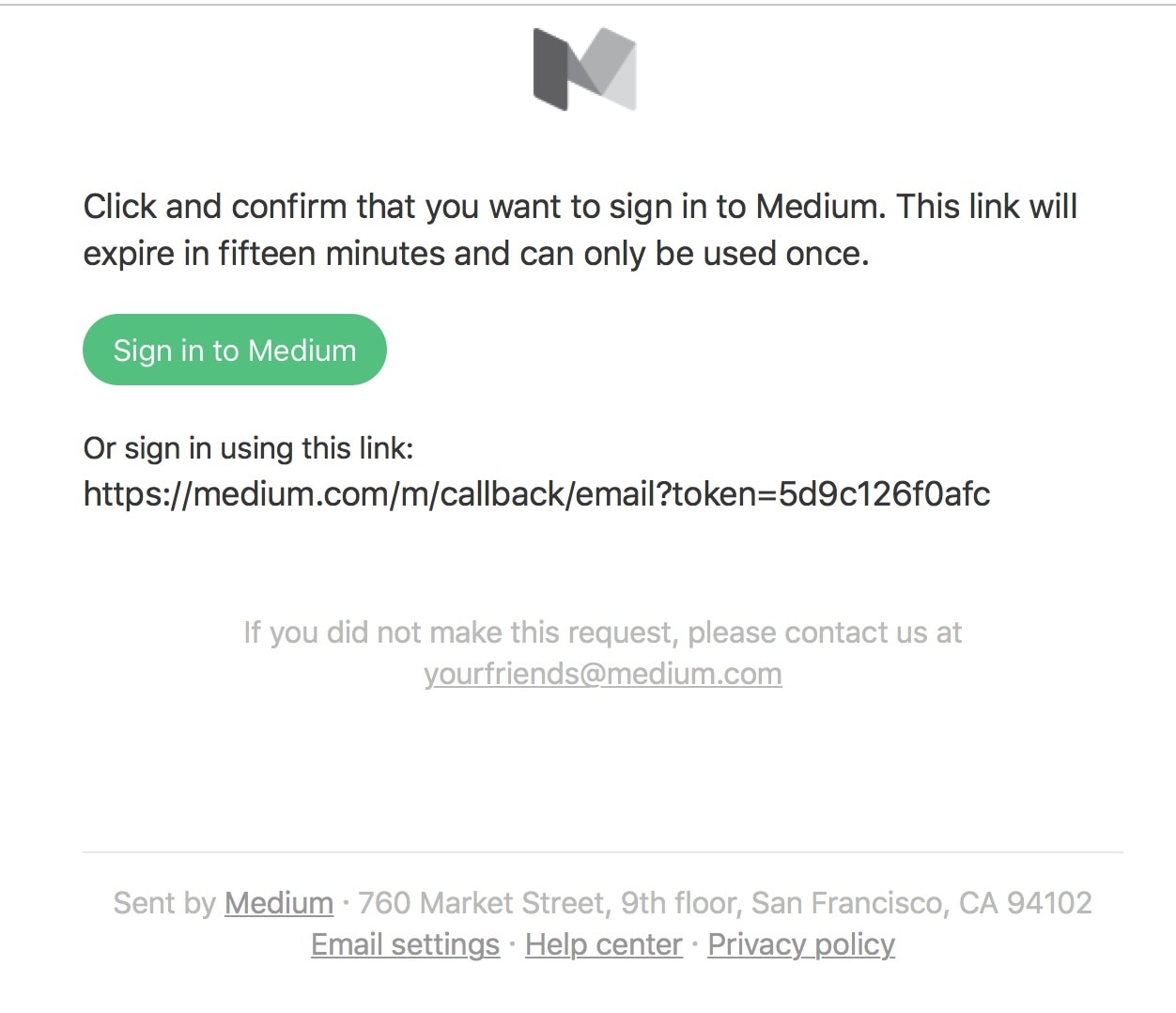 So instead of being able to fast track a response to a story I’ve opened up from Medium’s digest email to me, I’m bogged down in a cycle of five minutes of failed login (no login possible), email send, checking email for a login link (which sometimes doesn’t come). Could any process be less rewarding of engagement?

Medium’s idea of automatically allowing comments to become self-sufficient stories is extremely cool. The way it works is that when you start commenting, your comment becomes its own story that others can comment in. Something like nested comments into infinity.

So far so good. The issue is the number of clicks it takes to see comments let alone nested comments.

Example. When I start with DHH’s story “You don’t have to take every handout or jump through every loophole” I’m presented with a story with no comments underneath it. There’s an option to Write a response or to Show all responses. It’s absurd that I have to click now just to see comments. What happens later is worse though:

I’m shown half a comment. To see it all I have to click read more. I’m distracted by options to clap and a tally of existing responses. Clicking that number of responses strangely does not take me to the response but instead to the comment itself where the whole nightmare begins again with a Show All Responses button. I’ve just shown I’m interested in the responses. 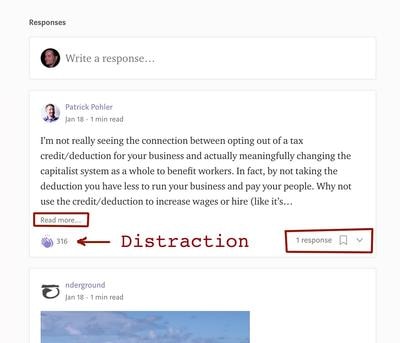 So what’s my payoff for all this three clicks to see DHH’s response to a thoughtful comment? 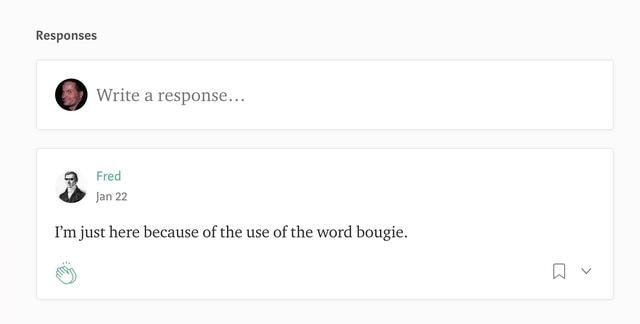 A stupid throwaway comment from a guy who thinks he’s funny. Is it worth chasing down comment threads on Medium? Based on this experience definitely not.

I’m not sure if Medium is running banners and living on page impressions. There’s at least three or four page impressions per nested comment which shouldn’t happen. Might be great for short term advertising revenue (if you advertise on Medium you should immediately ask for steep discounts as you are getting angry eyeballs who have no interest in your or any other products at this point) but it’s terrible for users. Medium started off by trying to be more usable, than say for instance, WordPress. To the point Matt Mullenweg started to have nightmares about Medium. In response, Mullenweg has decided to dynamite WordPress’s editor to try to emulate the Medium writing experience (Project Gutenberg).

Medium was kind enough to send me congratulations on being one of the top contributors (stories and comments) of 2016. I didn’t win one of these awards in 2017 as I’ve grown exasperated with trying to read and comment on Medium. 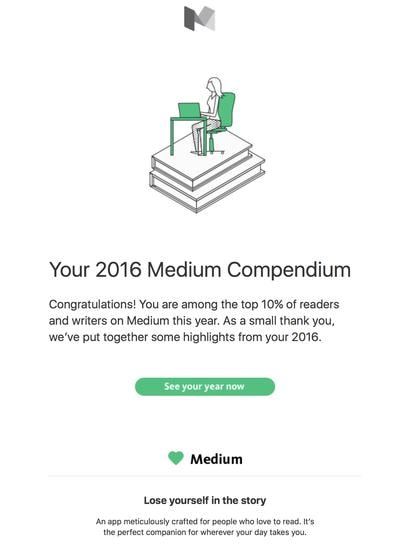 What I do now is just read the story. Sometimes I’ll drop a top level comment. I’ll never reply to another commenter again (even though I’d like to). The Medium comment system is simply broken as it is.

Curiously enough, the number of my comments in 2017 was 10% higher than 2016 with similar read and engagement numbers. No congratulations.

Pattern of Medium use: Medium Subscription

But I’ve noticed that every time I start to engage deeper in Medium I become so frustrated within a few weeks that I disengage again. How many more frustrated would-be Medium contributors have been driven away by the incredibly poor community interaction (comment system)?

Medium would already have my money as a subscriber but I hate the idea of spending more time on Medium due to the horrors of the commenting system so my money is still in my pocket. So not only is Medium’s poor commenting workflow costing them engagement and content, it’s directly costing Medium money. Money Medium desperately needs.

How to fix Medium Commenting

It’s pretty simple. If Medium is really intent on keeping the stories clean without comment on first review, that’s liveable. But at the point where I hit “Show All Responses” I want to see those responses, at decent length (not half a paragraph or the first sixty words as now). That should include nested responses when I click read more.

A comment author should later have the option to upgrade a comment to a story with its own title (can then become “originally in response to”). But there’s no reason for every comment to be its own story. It’s a very utopian perspective (stories and comments are equal) which doesn’t correspond to human thought. An original story or essay is an block stone of content while a comment is exactly that – a direct response to the original work.

At the very least when I click through to the URL of the self-standing comment I should see not just the full comment but responses to it. It should probably be impossible to make a comment to a comment its own self-standing story. This would avoid the Russian boxes of comments and stories.

Sure there are some essays which offer far less than some comments. That is not a reason to equate the two. It’s more a reflection on poor writing or thinking of the weak essayist.

Across the internet, I have many comments which are worth building into an original essay. I plan to start doing so. Medium taking the individual pieces of what should become essays and equating them with a finished essay helps no-one, neither writer nor reader. There is no solution to the hard work of writing except time and hard work and a focused mind.

It’s so incredibly frustrating to see new media creators come so close to creating a tool of lasting value and then fall down in sight of the finish line. It’s happened to both Tumblr and Del.icio.us. Not accidentally both Yahoo properties. How have some other platforms succeeded?

Twitter has gotten worse rather than better over time, more concerned with placating Democrat friends of its founder and the US Deep State than fostering open dialogue. There is a general retreat from Twitter as Twitter becomes a less reliable and neutral publishing partner.

Facebook has lasted this long as much as I loathe the national security aspect (a more complete database of the personal lives of the world’s population than the KGB had of dissidents in the Soviet Union), Facebook makes it easier and easier for users to share more and more. Facebook has been true to its platform and ease of use, albeit more or less ignoring privacy issues.

Facebook’s own involvement in censoring the news is creating some of the the same issues for Facebook as Twitter. As Facebook has a strong personal aspect, outside of a news republisher or promotional tool (unlike Twitter), censorship is less of an issue than Twitter.

WordPress is lost in its war with Wix and Squarespace to the point where Matt Mullenweg would like to raise more funding to spend it on advertising. He’s ignoring that the WordPress community was built on word-of-mouth. Making WordPress better (fewer updates, more stability, less security issues, more security, performance and functionality basics built-in). WordPress does allow a funded organisation to build a better weblog than Medium, albeit without the built-in community. Without fundamentally changing its character (one size fits all publishing), Medium should ignore WordPress and stick to what it does well: a no headaches weblog system. That means improving usability.

Medium should think less about page views and more about making it easy for its community to interact with each other’s stories. Hopefully Medium can go back to working for the long term benefit of its contributors sometime soon.