People who use WordPress to publish their poetry, their photographs or communicate to their customers their small business (about 30% of the internet) may not even know about Project Gutenberg. Ostensibly Project Gutenberg began as a new editor. Given how mediocre the WordPress TinyMCE editor has been from inception (note: we created FV WYSIWYG on FCKedit ten years ago and it’s still the only editor which allows a writer to switch to code view and back again and not have all his/her paragraphs and line spacing arbitrarily changed), a new editor is a laudable goal. 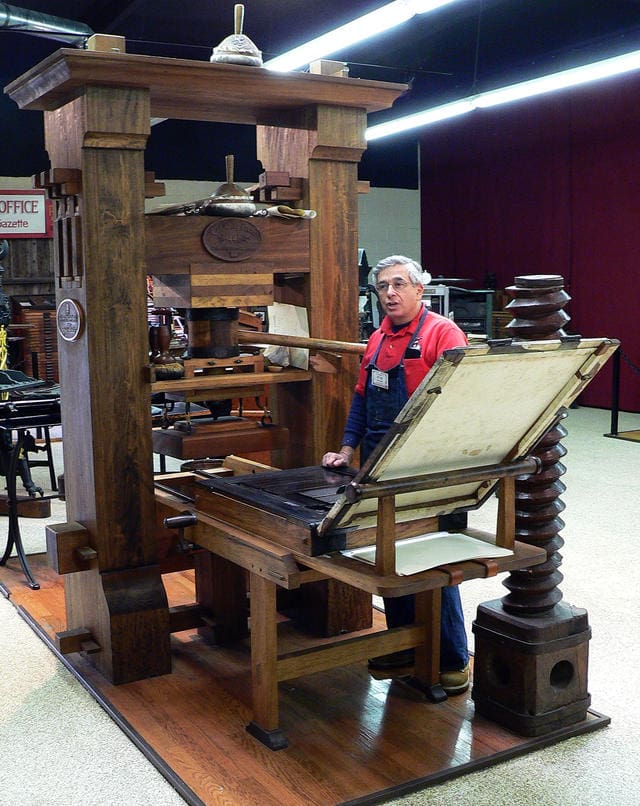 Peter Small demonstrating the use of the Gutenberg press at the International Printing Museum.

Unfortunately Project Gutenberg turned out not to be an upgraded post editor but a new vision of WordPress in permanent Page Builder mode. There have been serious writings about the tyranny of choice. By forcing writers to make decisions about blocks, multiple photo layouts, forms, sliders every time they create a new paragraph, there are two results likely:

Since page builders came on the scene, indeed many WordPress sites, even for commercial organisations, look like they were built by kindergarten children with uneven margins, randomly inserted photos combined with sleek drop shadow. Performance is to match (very poor).

“Under pressure” from Wix and Squarespace over market share, Matt Mullenweg decided to go for broke and sell out the core WordPress experience as of 2012 – a sleek and customisable publishing solution. WordPress was never meant to be a design tool, it was a CMS. I have no idea why – other than market share – Mullenweg decided to turn a hammer into a scale ruler. Scale rulers are about as useful for pounding in nails (posts) as wine glasses. I specifically say Mullenweg as honestly he’s the only one with any control over WordPress. People will mention others but most of those others are on Mullenweg’s payroll directly or indirectly, including WordPress’s only regular beat journalists Jeff Chandler and Sarah Gooding of WP Tavern (part of Audrey Capital)

Many WordPress advanced users and developers have tried to contribute and reshape Project Gutenberg to be less extreme and more manageable.

As the WordPress editor has been deprecated to plugin status as the “Classic Editor”, the community has finally woken up to the grim news they’ve been sold the Emperor’s New Clothes. A feeling of shock which finally resulted in WordPress’s accessibility team lead Rian Retveld (unlike me, Rian bleeds WordPress when cut) throwing in the towel and resigning. No matter how hard she works on improving accessibility, Project Gutenberg rides rampant over her concerns.

WordPress is fast becoming the F-35 of CMS. Over-budget, over-featured and unreliable. Four hundred and six billion dollars later, most missions are still being flown by F-16. I’ve been so depressed about what a complicated, unreliable and high maintenance pile of crap WordPress has become in the last few years that over the last three or four months I’ve been paying less attention to WordPress news. I’ve given up participating on Trac tickets or donating employee time (costs me directly out pocket hundreds of euros an hour as our team would be  working on paid projects). Our team hasn’t enjoyed participating as there is so much political squabbling and so little productive coding done that really unless I pay them and mandate it, no one wants to do any work on WordPress. This is after a dozen years of regular contribution with either free plugins or core contribution. 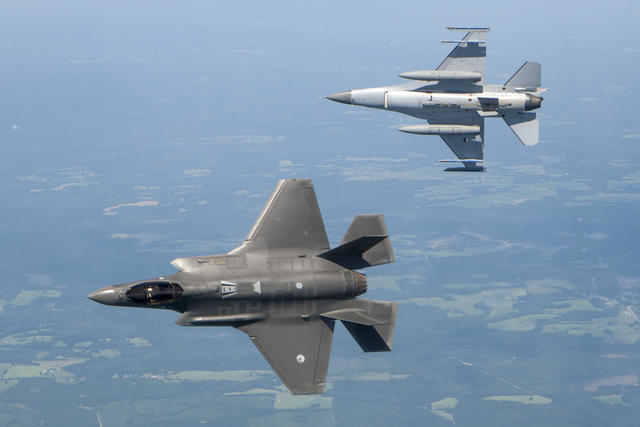 F-16 and F-35. Very similar to the naked eye.
One is fit for purpose with low maintenance costs, the other is grounded.
Something like the new improved WordPress.

So I’m a bit out of the loop for the last six months. Peter Knight has been following the Project Gutenberg drama (everything at WordPress seems to be a drama these days – when a company runs roughshod over its users drama should not be a surprise) closely and posted this incredibly insightful comment at WP Tavern. I worry that the comment there might disappear at some point or the whole post, so I’m republishing it here as the main article (I’ve checked – this text is not on Peter Knight’s own site):

Maybe this will be a wake up call that was needed. Decisions made by core developers in the name of immediate productivity and in pursuit of perverting goals (50% market share) under arbitrary timelines have tons of unintended consequences.

Inclusiveness, open source ideals, democratising development… These are still ideals of the WP project are they not? There’s a big gap between the ideals and the direction WP has been going in.

Gutenberg has raised barriers to entry for anyone looking to contribute or work with WordPress code itself, this seems like a prime example. We’re now leaving it up to people who are the narrow minority of people, enlarging the gap between contributors, users, 3rd party developers on one hand and core developers on the other.

Nothing signifies this more to me than the fact that Gutenberg in a departure from standard practice has been shipping with code that can’t be easily debugged on the spot (with only built/minified code on offer) without numerous extra steps. It has made a significant part of the codebase the preserve of people who are both comfortable with react and have the inclination and confidence to setup a development environment. Effectively, a signal this sends is that working on that code is for core developers, or those with their abilities. It alters how people behave when they run into problems.

I can’t help but note the gap between what well-meaning core team members say and what is the actual case.

When React was chosen, one of the arguments was that was easy enough to learn and that React being so popular would be an advantage in courting attention from the wider JS community. That certainly doesn’t seem to have been the case here, with highly motivated contributors struggling to get productive and struggling to find people who do have the required expertise to help.

It was also said that React would only be a layer underneath, with WordPress providing its own more agnostic api layer in between, playing down the need to basically master React to be productive working on core and develop stuff on top of Gutenberg. This just isn’t true and it’s echoed in this story. If you want to be productive, you need to know React, full stop.

It’s been said that Gutenberg has been in “stable release” for a good while now, but every release we see the roll out of new features and major tweaks, while many people routinely encounter bugs that result in lost work and time.

It’s one thing to break some eggs in pursuit of a better WordPress experience for the whole, but I find it very hard to think this is the way to go about it. WordPress became a success because the barrier to entry was low and invited people in. We now seem to have switched to a model that seems preoccupied by having a small number of makers produce an end product that is going to wow everyone, particularly the new users who would be choosing between WordPress and hosted solutions like Wix.

In that model, development happens more like in a company and users are more like customers who do not need to know how the sausage is made. The real brilliance happens in the core team, who divine their own solutions and parse what customers say with the understanding that the customer doesn’t really know what they are talking about. The response to feedback so far tells the story. You get the same response a company might give. Bad reviews can be treated as noise. It can be labeled as ‘interesting data’ to the CEO. Or it can be taken as a signal that the coding rockstars just need to work a little harder to get it right. This furthers grows the mental divide between core developers and the wider community, while many community members feel even more divorced from how WordPress evolves.

It’s not by design but with the dominant influence of those with high level js skills and react familiarity working in core means all other people are effectively obstacles that slow things down. It’s happening between all categories of WordPressers. Even experienced people who’ve done tons of core work or are noted contributors in other ways have adopted an overly deferential position because they don’t feel as competent as others js-centric devs. Contributors with different expertises (like accessibility or privacy) feel like they are at a disadvantage because they are not the first class citizens in core development world.

One of the worst things about this is that the culture just might continue to change to match this dynamic. Users may start treating WordPress more and more like some product produced by a technical team of workers and less like a co-owned community project in which everyone is a potential contributor. The most bewildering thing is how Matt is helping drive this, by pointing at market share ambitions and being preoccupied with competitors that most in the WP community don’t even care about. There’s no profound vision unfolding here, if it were we’d be building the best editor possible for the sake of users, not for the sake of ‘survival’ concerns, growth of market share and certainly not under the pressure of artificial time limits while deprioritising other important things, like accessibility and the approachability of WordPress in general.

This is an excellent analysis by Peter. It turns out the community is being alienated and I’m not alone. More and more of the advanced (but non-core) WordPress community are drifting away. Many find other CMS which are truer to open source and democratic ideals. Others just decide to go about their business and no longer contribute (our case for now). We’d prefer to work in PHP and javascript. We don’t have much interest in the latest hot frameworks which seem to come and go every two or three years. We build useful, fast, stable and reliable advanced web publishing systems for discriminating clients, not technology demos.

Why do we stay with WordPress? As the publisher or WordPress’s most feature rich and reliable video plugin, we have a commitment to thousands of paid users. We also built and support dozens of VIP clients WordPress sites. Moving away from WordPress would not be a casual decision neither for us nor our clients.

Will we support a fork? Probably. Our plugin BusinessPress already gets rid of a fair amount of the default WordPress.org install noise, adding hidden preferences and saving a publisher installing twenty plugins to clean up default WordPress or creating a huge custom functions.php section to use on every theme (functionality should be in plugins not themes). We’d be keen to contribute to a fork which makes many of these changes at an application level.

It’s time for either Mullenweg to stop listening to his VC buddies and start listening to the community or for core WordPress to be forked. It’s happened in the past in a similar situation to Mambo. It’s sad that it had to happen to WordPress but with the alienation due to a focus on the wrong issues (market share rather than product quality for its enormous existing userbase), it’s been a long time coming.

Image credits: vlasta2. Peter Small demonstrating the use of the Gutenberg press at the International Printing Museum. Netherlands Ministry of Defence.