At Foliovision, we like to stay behind a few versions on WordPress. This means our clients enjoy stable custom code for their complex membership and business sites. What it means in real terms is that a site usually stays on the major WordPress iteration on which it was released.

Staying on security updates enormously decreases a publisher’s WordPress maintenance burden. We’re really grateful to the core WordPress crew for continuing to post security updates for every WordPress release from 3.7 on. On the other hand, it’s extremely rude of WordPress to constantly push small publishers to do major version updates without letting the publisher know security updates are available (1). Our BusinessPress plugin solves update anxiety. We lighten up the update notifications, give you more information about what version you are running and encourage you to install the latest security update. Most importantly, BusinessPress prevents clients from pushing through a major update accidentally and breaking their site. On the Christmas holidays for instance. 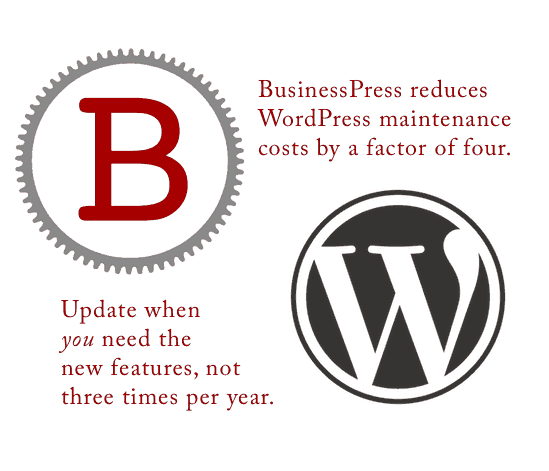 Update when you need the new features, not three times per year.

Right now we have sites on versions of WordPress from 4.1 all the way through to 4.7. For 2017, we’d like to consolidate on a single long term platform, so I’ve reviewed all the recent major versions of WordPress to pick the one on which we’ll keep all our VIP clients for 2017. What I’m looking for first are game changing performance improvements, workflow enhancement or which add new technology which our clients would really use.

The first version we are considering is version 4.4 as it supports responsive image handling. Retina2x can add some of this on pre-WordPress 4.4 but Retina2x works with post-4.4. It’s a good idea to have the basic responsive image handling inside WordPress. Improving the display of images is so important to online communication, I’m disappointed that WordPress has declined to add proper support for hires images into core. Thank heavens for Jordy Meow’s Retina2x. 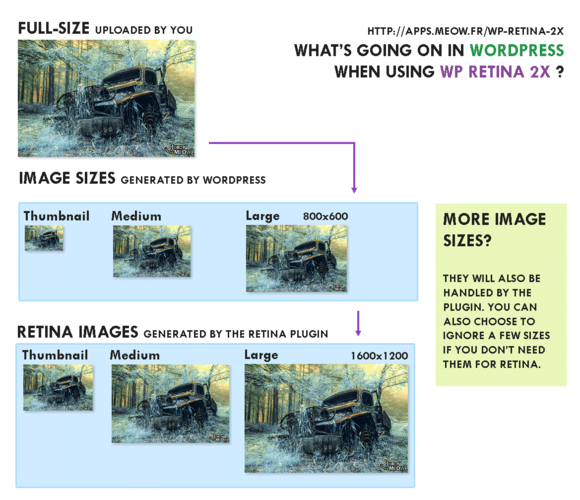 How Retina2x and WordPress handle images

After the responsive images in 4.4 through to 4.6, for the small publisher publishing in a latin character based language, there are no new features in WordPress which are so amazing to justify the upgrade (2). In 4.7 though there is a feature which really does matter to small business websites.

The killer feature. is support for multiple templates for posts and products out of the box. This feature really simplifies managing complex sites and will result in a much cleaner database as less presentational code will show up in content areas.

For instance, adding multiple template support discourages the use of clumsy page builders within individual web pages. If you want a seriously alternative format for a kind of weblog post, built a template. If you have different kinds of products, you can have multiple templates within your store without hacking the PHP. 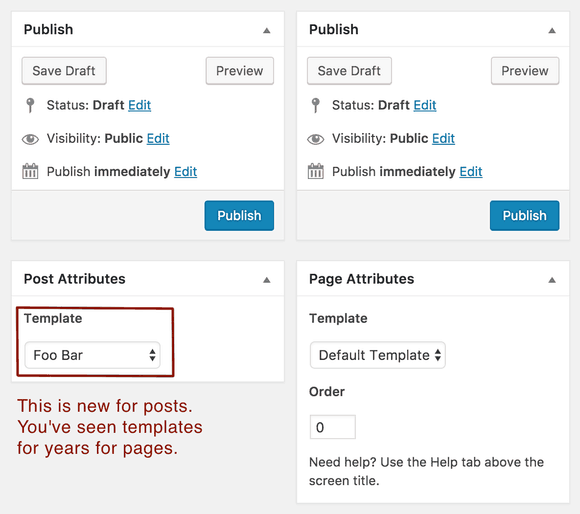 Other improvements and/or danger areas

We’re also getting (I’m only including features we care about or which might break client sites):

Advertised big improvements we really don’t care about or even find destructive:

Special Notes about the Customizer

About the Customizer: coding a theme inside your CMS was always a stupid idea. It’s still a stupid idea. The Customizer only exists as Matt Mullenweg is alarmed about how SquareSpace and Wix allow people to customize ther sites within the app. Hint to Matt: Wix and Squarespace don’t do it within the CMS with javascript trickery but with a special hosted site building application. If you want to create a theme builder or customizer that would be the place to start. With a separate service or app.

Heck it would even be a great service for Automattic: a robust theme customizer. You upload your theme to the service and make changes.

In the meantime the Customizer tried to do much:

A really useful plugin would be one to consolidate all your Customizer changes and package them in the right way to add to the core of your theme.

Recommended version for 2017: 4.7. If you have a site with a some legacy code issues, we’d recommend sticking to WordPress 4.4. If you have a custom site which is really difficult to update (and which doesn’t have the tech budget for additional work), you can safely stay on WordPress 4.0, 4.1 or 4.2.

We haven’t had any sites running on 3.7, 3.8 or 3.9 for a long time so I can recommend or not staying on them with really legacy sites. We did have a complex four year old ecommerce site come in with WordPress 3.8 this year for a full codelift. Huge amounts of the legacy code would have broken if we’d updated the site to a recent version. The work involved in bringing the site up to contemporary standards was over $10K. In this case, it was worth it as there were a lot of big improvements which could be made at once (the web and design had changed quite a bit in the meantime). What was amazing was how well the old site performed and how robust it was. Page loads were under two seconds and the old site had processed tens of thousands of Paypal transactions with minimal issues.

The point – which I think the WordPress core crew often misses – is don’t break what’s not broken. Change for the sake of change itself is a waste of effort and a large psychological distraction. If your site works, keep it stable. Focus on your business, not your technology.

(1) We also don’t like that people like Aaron Jorbin never stop carping about updating to the latest major version of WordPress when it’s often really bad advice which will create lots of extra work for the site owner or publisher.

I would encourage you to keep all the sites you host updated to the latest supported version of WordPress. This will prevent you from having any issue requiring plugin.php once 4.7 is released.

Aaron is far from the only one but his comment is the one close at hand today and typical.

Updating to the latest WordPress major iteration will not cure cancer. A lot of great looking and inspiring and important sites were published on WordPress 3.x. It’s depressing that WordPress developers believe adding yet frequent technology hassles improves publishers lives or websites.

(2) I’m not arguing that the core structural improvements to allow multi-lingual URLs and enhance support for alternative character set and right to left languages are not important. They are. But if you are running an English or other mainstream European language website, those improvements are not important to you and do not justify updating your site. In fact, those changes will be invisible to you unless they happen to break your site.