We love Satollo and loved Hyper Cache (we’re longtime paid users and supporters of his Newsletter technology as well). Strangely, sometimes good developers do bad work. The latest version of Hyper Cache (version 3) is a prime example of what can go wrong with rewrite upgrades.

Since we were struggling with Hyper Cache we decided to take a look at WP Rocket (enjoy 20% off with that link) who is the hot new caching kid on the WordPress block. Sadly WP Rocket is not a good replacement for us for now. We test and compare Hyper Cache and WP Rocket below.

“You must save the options since some files must be updated” 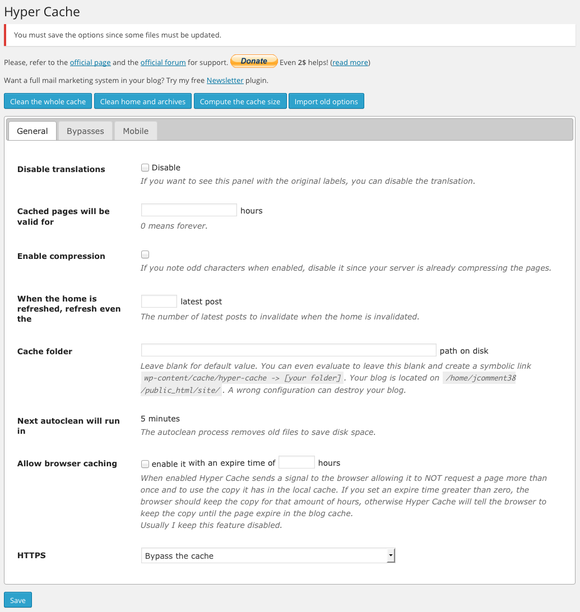 As we maintain dozens of websites and have built hundreds of websites, this is truly disappointing. It means we can’t just upgrade the plugin automatically, but somebody must go through the sites and put in the correct settings.

There is an “Import Options” button, but it doesn’t import all the settings properly, so watch out for these!

This means we have to update the plugin manually on all the websites and 99% of our client’s can’t do it on their own.

Installing a new copy of the plugin now involves extra step – following option needs to be enabled for a good commenter experience on your website:

Due to the unfortunate assassination of a dozen French cartoonists (evidence points to yet another false flag attack), a client’s political analysis sites was facing over 300,000 visitors/day. We faced some performance issues on the server and were able to see the latest Hyper Cache under real stress. What we noticed is that many non-cached requests had query strings attached (i.e. client.com/2014/postname.html?utm_source=dlvr.it&utm_medium=facebook). The older version of Hyper Cache – 2.9.1.6 – the last one we liked has a setting to include the pages with query parameters in cache

WP Rocket also allows us to set which query parameters don’t play role in cache (http://wp-rocket.me/changelog/ — “Cache URIs with specific query strings variables (Advanced Options)”) – the ones above are for Google Analytics which runs in JavaScript, so it should be able to check it as long as the cache plugin won’t redirect the URL to one without query parameters, it should only serve its HTML

Another five percent of uncached pages were being sent uncached due to an HTTP_CACHE_CONTROL header setting of “no-cache”. Bingbot user agent for example likes to send spurious “no-cache” requests. Hyper Cache 3 is written so that it only accepts this header for real visitors, not bots, but it clearly doesn’t detect Bingbot properly. For the moment, Hyper Cache 3 only recognises googlebot as a bot! The older version of Hyper Cache – 2.9.1.6 has a setting to ignore bots requests for uncached pages. Satollo, please allow website owners to decide if they want to recognise “no-cache” headers or not. There’s too much scope for abuse.

We’d heard very good things about WP Rocket, so we checked it out full of hope in our developer hearts. Perhaps WP Rocket  could be the cache plugin of our choice.

On the positive side, WP Rocket contains a nice combine feature for your JS (which sadly doesn’t support wildcard masks) and CSS. The Lazy Loading for images works nicely as well if you prefer that. It’s nice to have it all in one plugin.

We run the test on our Linode VPS server which we keep for this kind of purposes. It has Linode 1536 (that’s 1536MB of RAM) and runs NginX, MySQL and PHP5-FPM.

Finally let’s compare the traffic to make sure it was all real. Both plugins served the same amount of data.

For core caching both WP Rocket and Hyper Cache are great. In terms of putting together a usable and resilient configuration, the new Hyper Cache is a step backwards and we continue to recommend older Hyper Cache 2.9.1.6 as the caching plugin of choice. WP Rocket shows some real potential and we’d like to step up to pro caching and pro support as soon as their developers sort out mobile caching.  We cannot recommend Hyper Cache 3 as it is a real step backwards. W3 Total Cache and WP Super Cache continue to face the same issues with configuration and stability (W3 Total Cache) and performance/server load (WP Super Cache) so we continue to use both Hyper Cache 2.9.1.6 and WP Rocket.