Recently we’ve done a couple of Typepad to WordPress conversions for a very nice Austrian PR and marketing expert by the name of Karin Schmollgruber. Karin’s very up-to-date on social media and Facebook.

While we are quite active on LinkedIn and Twitter and various other social sites, we avoid Facebook like leprosy. Mark Zuckerberg has shown time and time again that he is not someone to be trusted with your data. In fact, the origins of Facebook themselves are dubious, he hijacked someone else’s code and project.

Our fundamental objections to Facebook go even deeper and affect our relationship with Google as well (I won’t use Gmail, although we do use Gcal and some Google docs at work and of course I use the webmaster tools as well). Basically, in the Soviet Union, the government spent a huge part of GDP on its security apparatus of KGB gumshoes and their paid and unpaid informants, maintaining huge filing cabinet in the Lubyanka on people of interest. In the US, the FBI did similar surveillance of Black Panthers, human rights and Indian groups, although these activities represented a much smaller part of US GDP.

Google and even more so Facebook is us doing totalitarian surveillance work on ourselves for free. Basically every time you add data to Facebook or use Gmail you are turning unpaid informant on yourself and your family.  In the US the boundaries between the state security organs and your private data are so emaciated that there is no difference between the data lying in US database at Facebook or Gmail or on a government server. In December 2009 on CNBC, Eric Schmidt Google CEO came right out and said it:

If you have something that you don’t want anyone to know, maybe you shouldn’t be doing it in the first place.

Imagine our amusement when Karin made Foliovision an ideal example of how to find fans on Facebook. Karin’s video is in German but basically she got a package in the mail from us and was very happy. She’d like to friend us in Facebook but we don’t have a fan page.

If you are a Foliovision client or friend after you pay for our work, we will send you a really nice polo shirt along with a thank you note. We spent a lot time of time choosing really good shirts and getting first class printing and we mean the thank you that we send. The thank you gift should reflect the same high quality standards we set in our work. 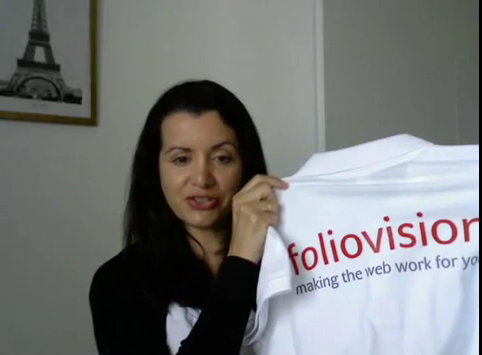 It’s probably a great marketing gesture but what is not accounted for in terms of its effectiveness, is that it is sincere. We really appreciate our T2WP clients from Microsoft to ZenDesk and the Hollywood Reporter to solo weblogs like Karin, Richard Nikoley and Scott McLeod at CASTLE trusting us to take good care of their websites and to do really great work for them.

So if there was some way to get a company fan page without having a personal Facebook account we’ll probably do it. In the meantime, thanks Karin for the shout out and we’d recommend marketing via Twitter and LinkedIn. We’ve also heard that Xing is very big in the German speaking world and more similar to LinkedIn than Facebook.

At this point, Facebook is an attempt to privatise the web inside of a closed ecosphere so we really want to keep our distance.

We’ll keep supporting the EFF, doing great work for our clients and sending out polo shirts. And staying clear of Facebook.