Those photographers who are early adaptors of new cameras and use DxO PhotoLab 5 have long known the pain of not being able to edit RAW images from their new cameras for many months and occasionally even years.

One such camera is Nikon’s amazing new Z9, which has been available since November. We can’t even edit iPhone RAW photos after the iPhone X.

What if I told you there was a $20 program which would allow you to edit almost any RAW file with any RAW developer with two clicks? Moreover, that program is now on sale for $3.

If you are on a Mac, I’ve found software which will allow one to easily make batch changes to a set of photos to allow PhotoLab 5 to edit Z9 files as Z7 II files. It’s called MetaImage and it’s very easy to use. You just download a Z7 II (I have a Z6 and a Z9 but no Z7 or Z7 II) RAW file and use MetaImage to get the correct Camera Model Name which turns out to be: 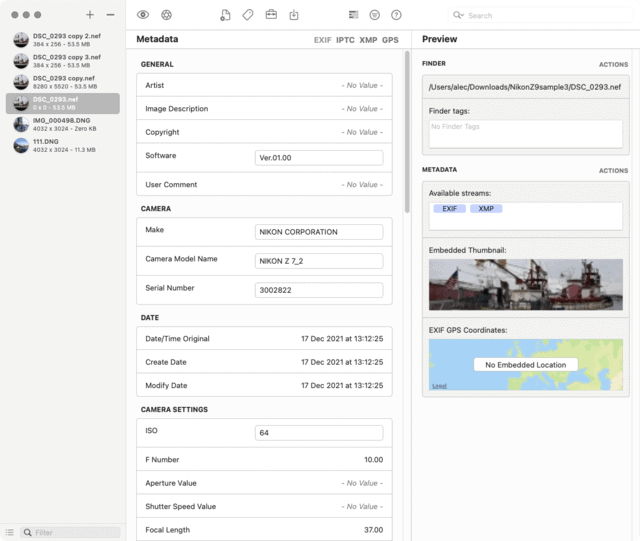 You then drag and drop as as many Z9 files as you like to MetaImage, select those files and paste NIKON Z 7_2 into the Camera Model Name field (replacing NIKON Z 9) and then save all (shift-command-S). You’re done.

This also works successfully on iPhone 11 Pro RAW photos to allow a photographer to edit his/her recent model iPhone RAW photos with DxO PhotoLab 5. Again, one must imply change the Camera Model Name to iPhone X photos and the RAW files become editable them.[^iOS15: I’ve tested with RAW photos from iOS 13 and have not tested with iOS 14 or 15 yet.] 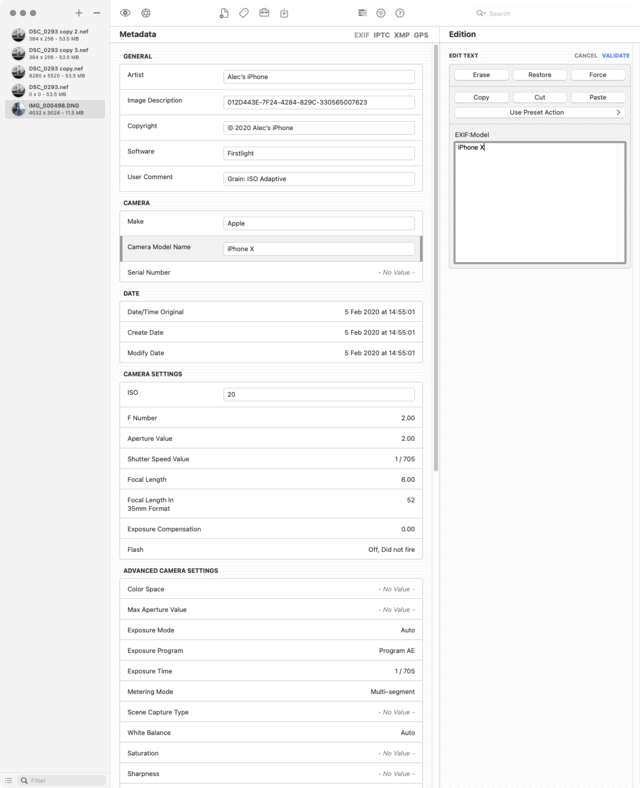 You can buy MetaImage for $3 on sale now (probably until at least 15 April 2022) along with some other useful software (out of what’s available in the current Award-Winning Bundle, I own and recommend Little Snitch, iMazing, Typinator, HazeOver, Cookie, Forkflit, EagleFiler, DropShare, TaskPaper; others I’m trying include from this bundle include FireTask Pro, OwlOCR Pro, PhotosRevive). There is always some junk in the bundles so choose carefully. Hint: look out for software which only allows licensing on one or two computers, it’s usually the knock-off Chinese or copycat rubbish. Better developers tend to license software per user or with three to five installs.

The MetaImage Camera Model change should work for other software like CaptureOne, Adobe Lightroom, On1 and Luminar as well. The key is that the underlying file format must be the same as that of the new camera. In the case of the Z9 and Z7 II it’s basically the same sensor with the data packed in the same way.

There’s other cameras which get slow support for which there may be compatible earlier cameras. Leica cameras in particular seem to get slow support whether it’s the Leica CL, Leica TL2 in the past or the SL2, SL2-S or M10R now. There’s a good chance that there’s either a Panasonic or Leica camera ID which will allow you to open and edit your RAW files. Of course, if the match is not a good one it will be more difficult and it may not be worth it.

In the case of the Nikon Z9 and iPhone DNG files, the match is perfect.

The other case where changing the Camera Model Name could be useful to a DxO PhotoLab photographer is if that photographer has a new camera but does not feel like upgrading to the latest PhotoLab or is unable to upgrade to the latest PhotoLab. Over the last three years, DxO has become particularly rude about not supporting more than two versions of OS X. So instead of having to buy a whole new computer or disrupt existing workflow by updating to a new version of macOS to upgrade PhotoLab, in many cases you could just change the Camera Model Name.

All of this can of course be done with Phil Harvey’s utterly amazing ExifTool. As amazing as ExifTool is, it’s not much to work with on individual images. It’s a lot more pleasant to have a well-made, purpose-built GUI in front of ExifTool. My own experiments with changing Camera Model Name a couple of years ago worked but were awkward enough that I never actively used the technique, despite having iPhone DNG images to process.

Happily MetaImage is a universal binary for both Apple Silicon and Intel Apple computers. Unfortunately the latest version of MetaImage is only compatible with Big Sur (macOS 10.11) or Monterey (macOS 10.12). Happily the previous version works with any macOS from 10.3 on (amazing backward compatibility).

MetaImage is useful for a lot more than just editing Camera Model Name. One can easily batch change any EXIF, IPTC, XMP or GPS information.

To use MetaImage as one’s main metadata editor, I recommend narrowing the visible fields to the one’s you really want to use. You can do so in preferences by editing the Displayed Tags. There’s many, many tags which are not being displayed now and there’s the opportunity to move the ones one doesn’t use out of the way for a more linear workflow. Not having to remember not to bother to fill in a field makes it much easier when adding metadata for a huge sports set. 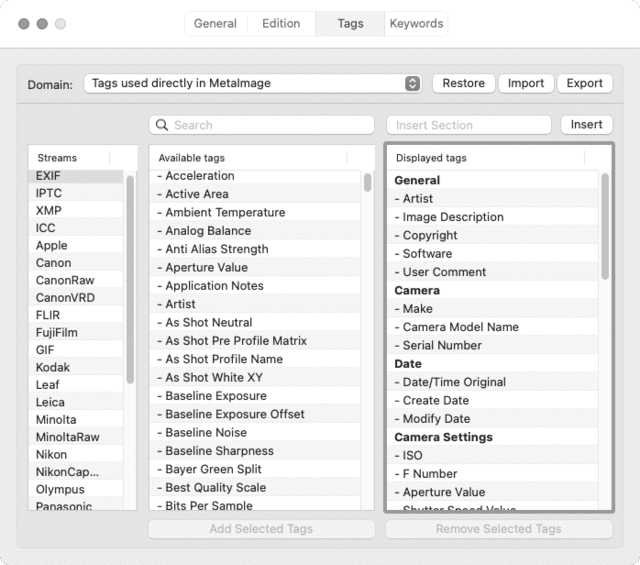 MetaImage is the missing arrow in a macOS RAW shooter’s quiver. It’s brilliant lightweight software to allow a photographer better control over metadata and his or her RAW developer. NeededApps also builds the very interesting PhotosRevive to allow photographers to colour black and white photos. I haven’t had the chance to work with PhotosRevive yet, but plan to. NeededApps is based in the French apps and has been developing macOS photo software for 10 years so seem to be in it for the long haul.