If you ever wondered how the video stabilization in the latest iPhones compares to what’s in a Nikon or Canon camera, here’s a short video shot simultaneously on a Nikon Z6, a Canon M6, and an iPhone 11, all at about 30mm focal length.

The Canon M6 I is at its lightest and most mobile with the 22mm pancake so I tested that. The Nikon Z6 was set at 31mm to be in between the two. The field of view difference was larger than I expected. If I were to do the test again, I’d put on the 15-45mm kit lens at 17.5mm to match exactly the iPhone field of view. The Nikon 24-70mm would then be set at exactly 28mm as well.

Here’s the formats in which I shot:

Why 1080p? The iPhone 4K is no great shakes, with very pixellated details and the Canon can’t do 4K, plus both Nikon offers far less rolling shutter at 1080p. 1080p offers the most level playing field.

All three cameras were attached to the same Tilta Cinema Cage with dual wooden hand grips. Here’s what the Tilta Cinema Cage looks like. It’s a reasonably stable platform, designed for hand-holding unstabilised cameras like the original BMCC. The motion is all handheld. There are seven sequences: 360° pan, action pan, walking, action pan ii, walking ii and running. 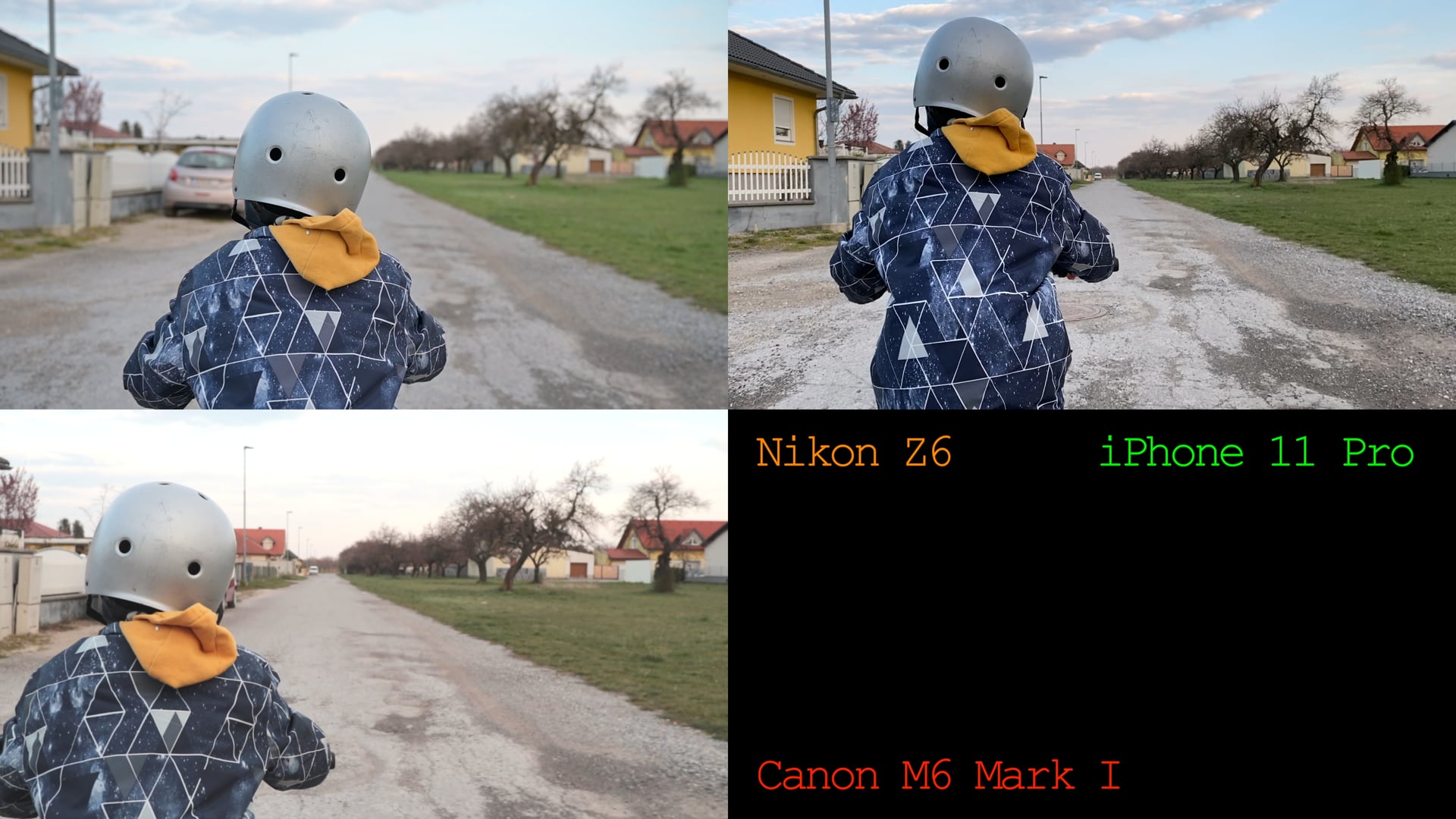 This is a slow walk. The iPhone 11 Pro looks like it’s on a gimbal. It’s uncanny.

The Nikon Z6 image is very stable but if you watch closely there’s some jello effect in it. This is the electronic stabilisation. Later tests on a Z50 have persuaded me that it’s usually better to leave Nikon electronic VR turned off. IBIS or optical stabilisation are a good thing but beyond that enhanced stabilisation should be left for post-production.

In terms of image quality, this is where the iPhone HDR kicks in. The sky looks gorgeous but the houses and trees all look a bit dark. There’s also some shimmer when the HDR is uncertain how to grade the road. The Nikon Z6 offers a rich, detailed image but would need a grade to bring back some of the sky and deepen the colours.

Alas, the M6 is unable to handle neither sky nor shadows. A blurry, murky image. Canon cripple hammer in full effect, as the M6 still are gorgeous. There’s nothing wrong with the physical sensor.

This is a more definitive and faster action pan. Both the iPhone 11 and the Nikon Z6 have a very small amount of horizontal judder. The stronger and clearer horizontal move apparently convinced both Nikon and Apple’s motion stabilisation that it’s a horizontal pan and not horizontal wobble. The M6 electronic stabilisation again was faultless in terms of panning. The M6 is marked as orange as the initial shot setup on the dog included a huge amount of vertical wobble.

The Nikon Z6 holds up well for the first half of the shot, while I accelerate. At some point, the IBIS gets a bit tired and confused by the larger up and down movement of running and there’s a few big bumps. I mark the Z6 as orange as much of the shot would be usable in casual or documentary footage. In terms of image quality, now that I’m shooting away from the sun, the Z6 offers plenty of dynamic range and offers lots of natural detail. The soft areas are due to depth of field with a relatively wide aperture. The iPhone nominally looks sharper due to (excessive) electronic sharpening and small sensor depth of field.

Canon’s electronic stabilisation holds up surprisingly well against running. It completely falls apart at the end of the sequence but does well for at least the first half. It’s harder to give a fair grade on the stabilisation due to both lack of detail in the picture and the absence of adequate dynamic range.