What or who is Helin? Learn more about the AI art project which sets out for finding new human shapes in the short documentary by Berlin-based creative studio Waltz Binaire with the narration by its creative director and self-director Christian Mio Loclair. 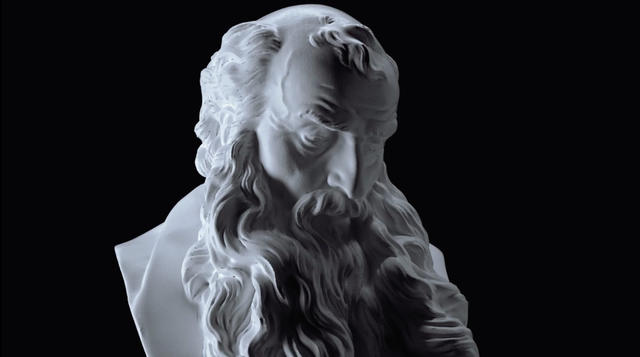 If an aesthetic object is created without any human purpose, do we witness an accidental product of nature or do we perceive new forms of artificial intentions? This question has fueled creative director Christian Mio Loclair to examine the borders between nature and artificial intelligence:

The project Helin investigates new perspectives towards the relationship of an individual artistic intention in respect to the collective nature of human expressions. By blending the concepts of human, nature and technology, we seek to discuss a holistic concept of natural phenomena. If an aesthetic object is created without any human leitmotif, do we witness an accidental product of nature or do we perceive new forms of organic intentions? Can art be considered natural, as it occurs even in the absence of the individual intent.
According to Immanuel Kant, nature follows no purpose but only creates the illusion of “Zweck”. In contrast to this natural phenomenon, art is initiated by a human purpose to shape a finite artefact. Using intelligent yet highly autonomous technology, we eliminate this human desire from the process of creation to witness the oxymoron of using technology to perceive natural art.
Our technical approach is based upon a novel procedure for Deep Learning in 3D space. The corresponding custom network architecture is trained on 120.000 sculptures and generates new alternative sculptures 30 times a second. Hence the sculpture Helin embodies an organic data mirror emerging from our collective historical heritage.

Thanks to the advanced technology used, Loclair was enabled insights into historical data of human expressions and translated this intelligence into a natural and tangible artefact of heavy dark marble. 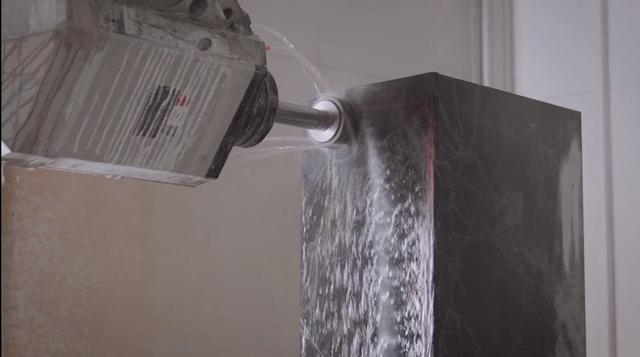 The somewhat abstract sculpture with the charisma of Kubrick’s monolith from the 2001: Space Odyssey is an impressive piece of artwork. However, presented solely as an outcome of the AI’s aesthetic values, it has generated an interesting discussion in the comment section about the relation between the role of an artwork and authorship:

“The sculpture is beautiful. It reminds me of Medardo Rosso’s ‘Behold the Child” But I am confused by how the premise of this project is presented. This is not a product of an aesthetic of an AI. The sculptures that HELIN are based on are all made by human artists according to traditions serving functions in human history. The AI is not going out to the world and developing its own visual language, its own taste, its ways of finding harmony, dissonance to feed its own sense of beauty. It is actually anonymizing and amalgamating different human artists’ work. It is more a curtain than a creator in and of itself. This is maybe why it looks like Behold the Child by Rosso. That sculpture was his attempt to depict a fleeting view of a boy as seen through a veil allowing it to have an arbitrary distortion that somehow made the depiction seem to capture something specific but not tied to the visage of the actual boy“, wrote one of the commenters Brian Fernandes-Halloran. 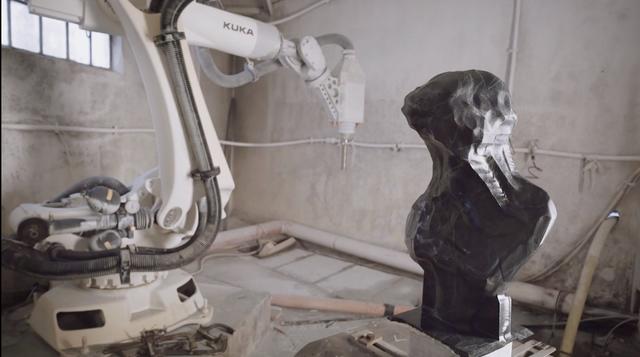 I understand that the argument has been made that all artists function in this way to some extent, that we take things in and combine what we have seen under our own authorship despite not being sure where we begin and what we have seen ends, but the AI is working from data that is all human artists, so it is more taking human intuition and human art and mixing it with other human art. Also, the vast majority of people seeing the sculpture are seeing it as I am, in a video directed by, scripted by and presented by human beings, and I know that you are aware of the importance of context and presentation in its effect on the content of a work. So I see this whole project as a work made by people that points to one inhuman aspect of the process and claims it to be the author. This is the mechanical turk. I think GAN procedures and mechanical turk are very different scientifically. But let’s take a look at its role in this as an artwork. The content of this piece, the input, material, and most importantly the presentation were all done by people for people, so while the mechanical turks function was to play chess, all its actual chess moves were decided by the person inside. Similarly, all the things that cast the significance of an artwork, content, context, language and presentation were all decided by people. So this is why I think the likeness to the Turk still stands. I will posit that art is not about exactly how a piece of stone is cut nor is it how a certain number of objects can be learned from to carve a new object, it is about the choices before and after the act of making, maybe especially these choices. This runs the question of how much power any human artist has over the parameters of her process, but that question is a good one for artists to contend with. It is a central question to contemporary art. It is one artists try to gain agency over, in how we present our work within a context, be it online, the art market, exhibition spaces etc. I think the issue I have is that the AI is not choosing its parameters. Maybe if it could move around with some wheels, brows images online maybe and see things for itself and produce something then it would be pushing itself into making something with a meaningful level of autonomy. If it could find a material and it could fail and learn from that. Then I would think of the AI as taking a creative role. But within this framework it is operating as a tool, doing a function not of its own design, a task it has no understanding of, not even from an artificial intelligence perspective. So I can see a creator around. Its the artist. The human being who made this artwork as I experience it as a whole.

This commentary is a great example of why subverting the original concept and idea that AI can replace human creative process is needed in the ongoing discussion about our own role. What do you think about the role AI plays in the creative work? Watch the video and let us know in the comments below! 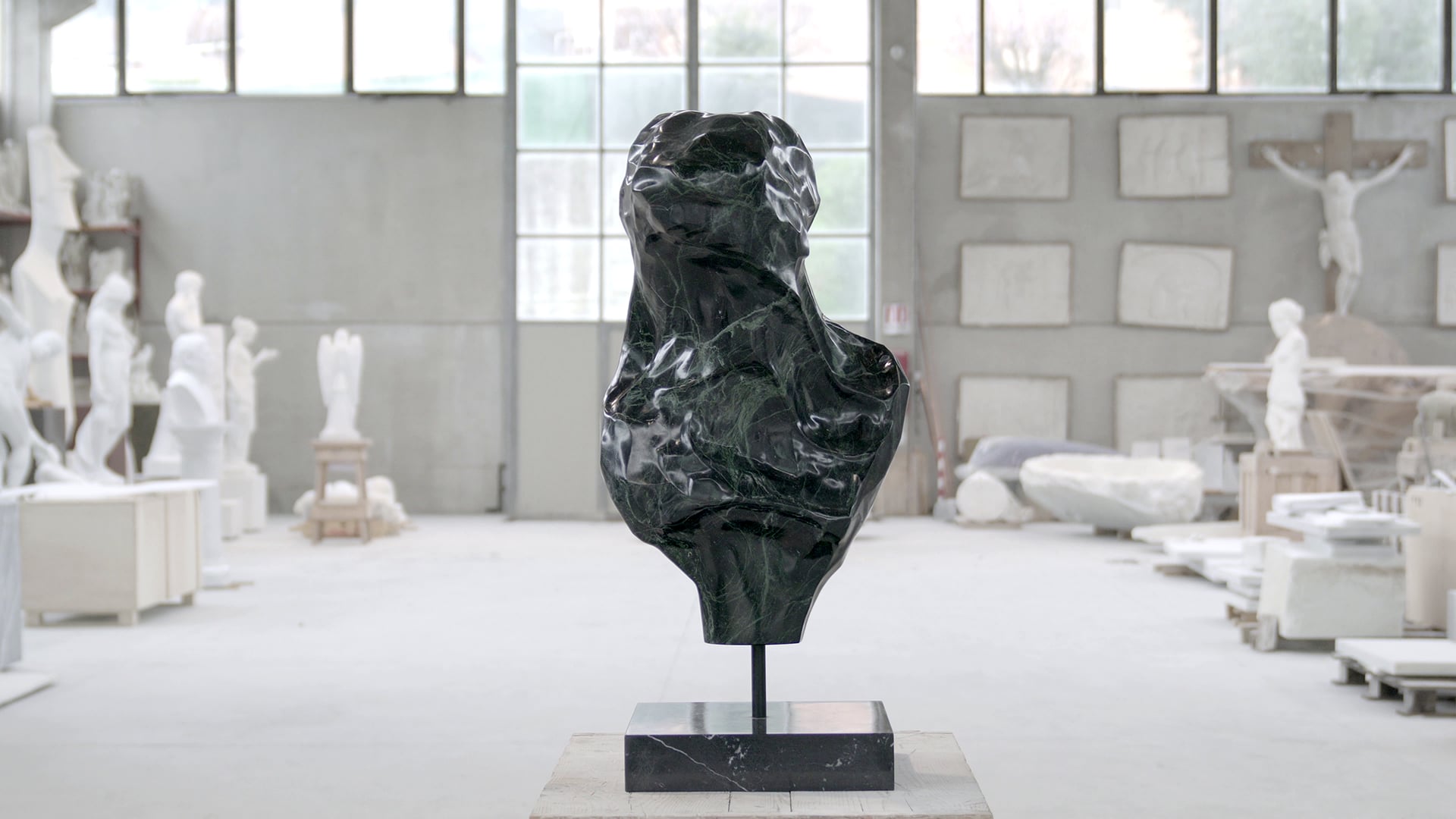 If you’re into more interesting projects merging art, design and technology, check out the website of Waltz Binaire or Christian Mio Loclair or Vimeo channel.