This issue has been fixed in FV Player 7 at the end of 2018. If audible video autoplay is not permitted it then goes to silent autoplay. That works with Android and iOS phones as well.

We received an increased amount of complaints about autoplay not longer working lately. That’s because of the new restrictions set in Google Chrome 66 – the most popular web browser.

I’m sure you don’t like when you visit some website and suddenly there is upbeat music playing from everywhere and you have no idea what’s going on. So companies like Apple or Google are gradually making it harder and harder for websites to play a video without user intervention.

This is how the error appears on browser console

It was working like that forever for mobile users, also saving the precious mobile internet bandwidth. Then the issue became so big that desktop browser started to address it as well. First Safari 11 (released in September 2017) blocked any autoplay video which is not muted. Now Chrome 66 (released in April 2018) blocks autoplay video unless:

So if a user has played a video on your site before, further videos can autoplay without issues. Otherwise only muted autoplay is allowed. You ca read full details in this article: Autoplay Policy Changes on developers.google.com

So to prevent broken playback we disabled video autoplay in FV Player 6.6.1 for Chrome 66. However it’s only a quick workaround before we get FV Player 7 our the door.

Why don’t you just fix it?

Fixing the issue for FV Player 6 is not easy, specially as the MEI score can’t be reset. That’s really bad for web developers – you simply can’t predict what the first-time visitor gets on your website. Read more in the “In Chrome 66, how do I reset the Media Engagement Index (MEI)?” topic on Google Chrome Help Forum. The answer is you can’t do that (apart from creating a new user account on your computer, or trying to access your website under new domain name, believe me – I tried).

Another update for web developers:

It’s easier to just click the Avatar icon in Chrome toolbar and pick “Open Guest Window“. Then you can check chrome://media-engagement to verify no MEI scores are present.

Beside that the developers are really hating it and now Google is already reverting some of the changes:

Your Google Chrome remembers you interacting with your site, so it will always autoplay videos on your website, while first-time visitors would get into trouble with broken video playback. 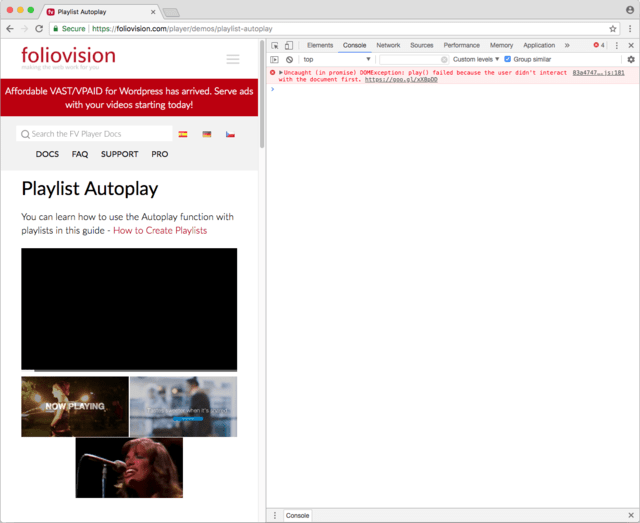 Unfortunately the video wouldn’t play at all!

I really hope Google Chrome will allows us to edit the MEI scores using some debug tool soon.

You might heard about FV Player 7 before and wonder why is it taking us so long to release it. As you might know we use Flowplayer for the core video technology. And while:

So it’s taking a while, but we didn’t just wait, we submitted fixes and bug reports to it as well, so we are really working hard to make sure you get a reliable product.

Now it is about to be launched for beta testing for all of our FV Player Pro users and it handles this scenario well. The video simply autoplays without sound. Then if the user likes the video he might unmute it (increasing MEI score). And the Chrome browser notices that and will allow videos to autoplay on the future visits.