There aren’t that many musicians out there who can say that they’ve played with The Rolling Stones, The Allman Brothers, Eric Clapton, Aretha Franklin, Chuck Berry, Train, John Mayer. And now you can have that musician teach you how to play rock piano.

Chuck Leavell joined the legendary Allman Brothers Band in the early 70’s. In 1973 they released the ultimate classic Brothers and Sisters album featuring what’s one of the rock instrumental masterpieces – Jessica. The solo on Jessica was what launched Chuck Leavell into rock’n’roll stardom.

The “Fifth Rolling Stone”, which is the nickname that is often given to Chuck, has toured and recorded numerous studio albums with one of the greatest rock bands of all time.

And you can learn to play Honky Tonk Women too, from the music lessons on Chuck’s website, irocku.com and his 40 years experience playing with the rock’s greatests.

How IROCKU came to be

Irocku is a rock piano lessons website, founded by Chuck Leavell and Howard Citron. It is not your usual music lessons site and not just because one of the co-founders is a real rock star. Irocku is using familiar, rock songs to teach people how to play the piano.

I was lucky to talk to the co-founder, Howard Citron, who is in charge of the business and technology part of Irocku. Howard is an avid musician, a piano player himself, and his dream was to learn to play like Chuck Leavell. Even though he actually helps write the music lessons for the website as well, Howard says he’s still working towards his dream of playing like Chuck, and it’s actually one of the reasons that he built Irocku, to be able to play at Chuck’s level.

Being an entrepreneur and wanting to learn (and teach) how to play rock piano, he got the idea to offer people a different kind of music lessons. It was a coincidence that got him to meet Chuck Leavell and gave him the opportunity to pitch the idea to his childhood idol. Chuck loved the idea and that’s how Irocku came to be. 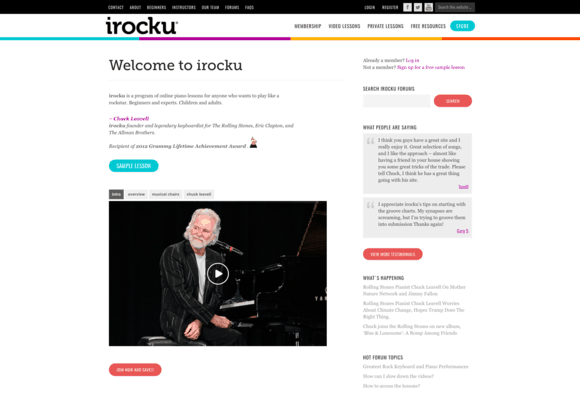 We want Irocku students to develop the dexterity and finesse of a classical musician, the spontaneity of a jazz artist, and the rhythms and licks of a rock star.

And their philosophy is very simple. They want to make piano lessons easy and fun. They want to teach you to play songs you actually like listening to, to play contemporary music. Because let’s be honest, classical music, no matter how great a piece of art it is, it’s just not rock and roll.

“I think people like learning what they like to listen to,” Howard told me. “You don’t hear many people these days learning how to play the classical guitar. They learn by playing contemporary music. People like to learn songs that they’re familiar with.”

A lot of Irocku students have actually studied the piano for years and they realized that they still can’t play a complete song, plus they want to learn how to play with a band, says Howard.

“The classical approach of teaching piano doesn’t teach you how to improvise or play along with others in a band setting,” he adds. “And that’s what ours does, so we do have a lot of classically trained musicians who come to our site to learn rock and roll. We also have professionals who come to the site to learn bands’ riffs and licks.” 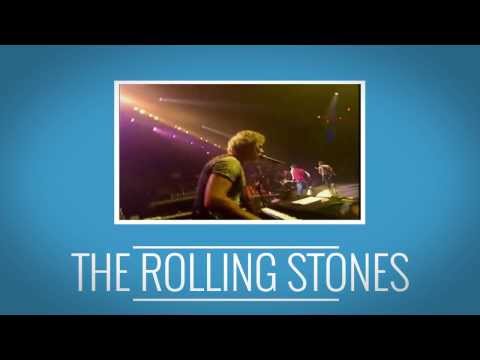 Howard says Irocku has close to a hundred thousand people who have used the site in over 50 countries. At the moment they have thousands of paying users and they range from music teachers who actually use Irocku’s music curriculum to teach their students to, as Howard calls them, “Weekend Warriors”;

they’re amateur musicians, who play in rock bands on the weekends and they want to learn the new music lingo and improve their chops. They want to become better piano players. So we have quite a few of them and those members can be the most active on the site, because they share and learn from each other.

The team of instructors, besides Chuck and Howard, consists of an impressive list of rock stars and young elite piano players. They pick a song, turn it into a lesson and post it to the website. Howard told me a bit more about the whole process:

When we have a song, Chuck, myself and some of our team, dissect it and figure out what are the elements of that song that we want to teach, what are the challenging elements, what are the elements that are particular to rock and roll. Rock piano is more like an athletic approach to playing music. Your left and your right hand are doing different things and that is a real important aspect of rock piano.

Since Irocku is one of the few music websites out there that actually pays for licensing, whenever they have a new lesson they have to wait for the approvals to publish it. But it’s pretty obvious Irocku is all about the quality and not the quantity and Howard confirmed that:

We’re like the martial arts’ approach where a student learns 20 different forms and they’ve mastered the art. That has been our approach – divide it into songs that each song is an educational opportunity and provide our students with enough songs so if they can master them, they can master anything. 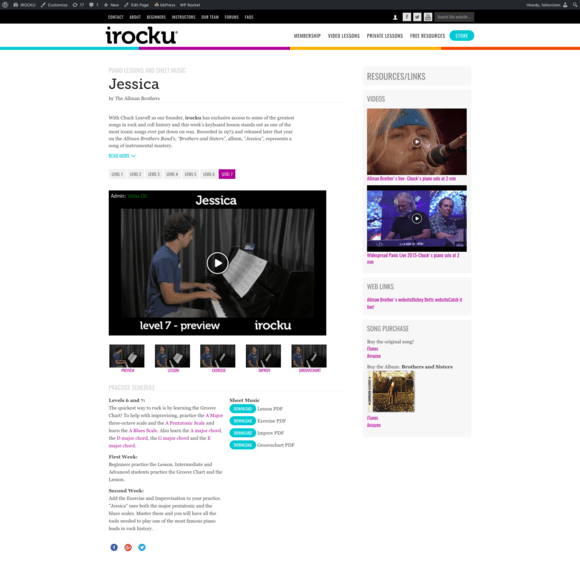 If you’re a beginner, you can actually start and learn to play Honky Tonk Women on the first level, but it’s a very basic approach, it’s more like learning Twinkle Twinkle Little Star. And you work your way up to the more advanced levels. The level seven is comparable to the level a professional would play with a rock band.

Beginners start with levels 1-2-3, intermediate 3-5 and advanced players can learn riffs and licks from rock’s greatest players on levels 5-7. Each of the lessons consists of a transcription of the song, an exercise to help you with the core concepts of rock and an improvisation to teach you to create your own riffs and therefore, play like a true rock star. In addition to these lessons, each song comes with a groove chart which will help you to learn quickly how to play with other musicians in a band.

If all of this sounds very motivating and if you can’t wait to start, but you don’t know the first thing about playing the piano, fret not. You can start with the note learner, learn to read music and the core concepts of playing the piano and work your way up to the 7th level of rock. 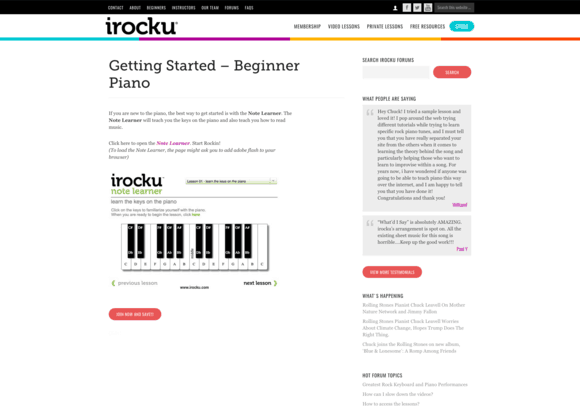 Plans for the future

When I asked what’s next for Irocku, I was happy to hear the enthusiasm in Howard’s voice.

Irocku is also planning on creating special series, focused on different aspects of playing piano in a band environment, including how to improvise over blues, how to play group piano, how to play left hand bass line and such. Users can look forward to trying the first part of the series for free on Youtube and then if they get hooked, they can choose to sign up on the website to get access to the rest of the lessons.

As I mentioned before, Irocku has an impressive list of instructors, and you can also sign up for one-on-one Skype lessons with all of them. Yes, you can get an online live piano lesson from Chuck Leavell himself or Jeff Labes, the piano player for Van Morisson. 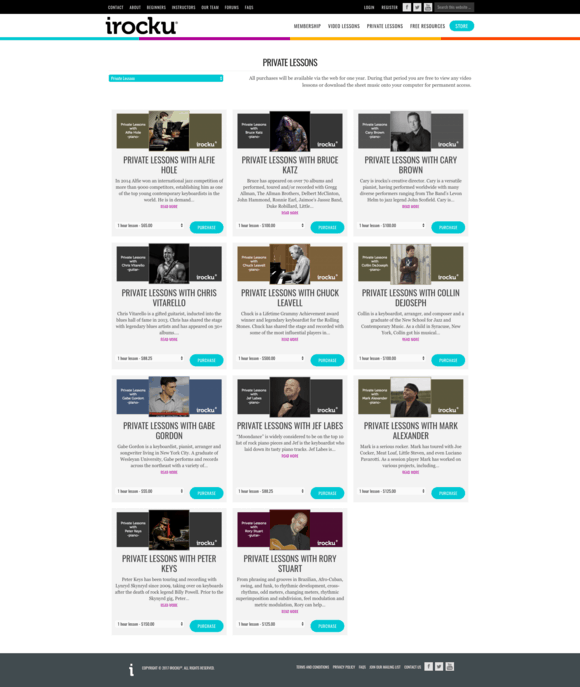 Since Irocku’s focus is on teaching people how to play the piano in a band environment, I was interested in whether they are planning on adding any more instruments to the mix.

We’re probably going to do that in a form of band lessons, because we have found that a lot of people, our members, are in bands and so now the people that they play with want to learn how to play this music.

So all of you weekend warriors and garage bands out there, what are you waiting for? This is your opportunity to jam with rock music’s greatests without leaving your bedroom or garage! Boy, do we live in great times, or what?

Howard himself runs an IT company, he’s a business consultant and his company focuses on the Fortune 500, which are very large projects. He is the founder of IcniVad, a company founded on the principal of harnessing innovation within corporations.

Originally, when they started building irocku.com, they didn’t want to build it on a complex infrastructure, they wanted something simple and open source, which is why they went with WordPress.

As the original version of the website predated the mobile revolution (not responsive on phones and tables), so Howard and Chuck decided to redesign it. Another goal in re-vamping the website was to do more to protect content and prevent pirating.

Before the redesign, the site allowed students to download the videos. They were downloading videos because to load them into different external players, where it was easier to play the videos. Howard understood that in order to keep the students and customers on the website, he needed a good video player that would have all the features an external player such as Quicktime has.

When we were rebuilding the site initially, we were using JW Player. We couldn’t get it to work in WP with the features we wanted, so we were searching for other video players and we came across the FV player and we loaded it right away. It was easy to load and easy to install.

Howard choose FV player because it had the AB loop, the slow down and the playlist. But while he was testing it on the site, he noticed that irocku had features FV player didn’t have, so he suggested that Foliovision should add them.

I contacted your support and within a day or two, Martin had added those features to the player. So that was actually what locked in the FV player for us. Foliovision’s team was as impressive to me as was the FV player

Chuck Leavell also enjoys using FV player. He was very kind to send us a video testimonial, so here is him saying hello from his home, playing some piano! 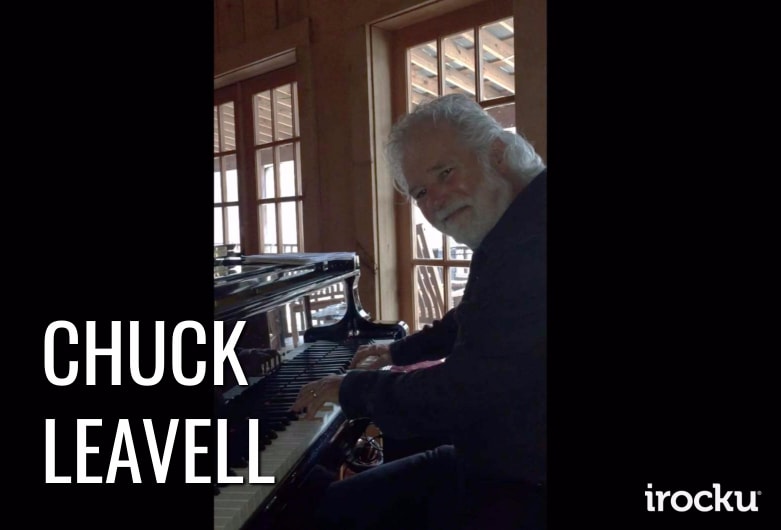 It is safe to say that with their innovative approach and never ending enthusiasm about teaching rock piano, irocku is slowly changing the way music is being taught. And we are delighted to have been able to help Howard and Chuck with that noble quest.