Simply – all the CMSy stuff it comes with. Blogs are an awesome platform. WordPress lets our entire staff contribute to the same blog, maintain tags and slugs, save and give feedback on drafts, upload and store media, back and forward publish posts, group our archive by month, lets our audience comment, lists trackbacks, et cetera, et cetera. It’s awesome! Blogs rock! But we knew this. WordPress is the perfect way for a business like ours to communicate with our audience.

Sounds good to me. David Karp goes on to write about the advantages of Tumblr: “posting with zero obligations, little or no comment”. Great for wisecracking, difficult for communicating. 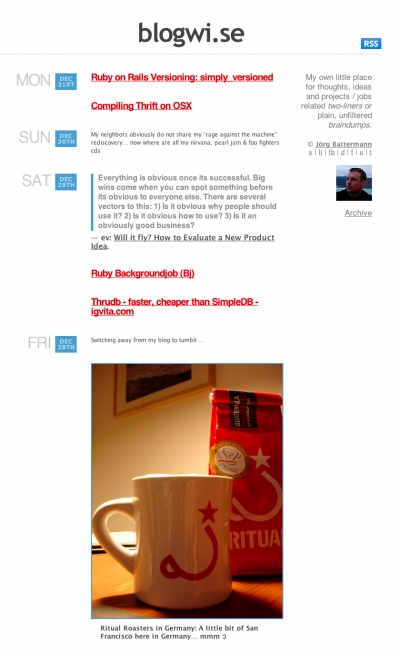 But why not have it both ways? Low overhead posts along with the ability to post more substantial piece.

It sounds to me like Tumblr should be a WordPress plugin or two. I’ll probably sign up to see what it is I’m missing out on. I’d like maintaining a weblog to be easier as well. Still at the end of the day, what should be taking the time up is the thinking and writing.

I do agree with David that posting into the default interface on a WordPress weblog is a lot more complicated and unpleasant than it should be. Genuinely distressful for a design sensitive individual. Here’s what WordPress Admin default post template looks like:

This is just the backend but if you are reading this you are looking at the front end of Foliovision.com. No excess of noise to signal here (5 January 2008). A lot like Tumblr.

The Foliopress Edit Suite does a lot to make running a WordPress weblog easier. It’s great for clients as well who don’t want to see a bunch of fields they don’t need. But I like it as well as it gives a cleaner environment in which to write and think.

What WordPress needs is:

Since we’ve cracked those with Foliopress Edit Templates, Foliopress WYSIWYG and Foliopress SEO Images, I’m not sure I’d want to have a Tumblr as well.

In terms of posting passing links, WordPress could still use some help. We should probably design a links posting template for our Foliopress Edit Templates plugin. If we hook that up the Foliopress Dashboard with a default link to posting link with commentary we are a long way to Tumblr simplicity.

An alternative would be the del.icio.us plugins for WordPress that already go along way to making posting links with one line comments easier.

One thing I do like about Tumblr is the really straightforward and attractive design. Apparently another 110,000 people do too.

The archive view is awesome as well. But behind those beautiful archives there is very little useable information. Just links to other sites. Pretty pictures with links could be useful for running a photographer of the day site. 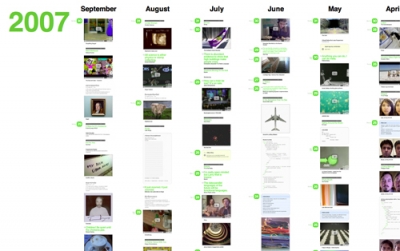 As far as I can tell, Tumblr is running on free.

Free is not a good long-term solution for a service. Monetisation needs to be in there somewhere.

If a service isn’t collecting money front up from the users, then the owners need to collect it selling ads or data or both.

Of course, Tumblr may just be a pure play for users, to be made popular at a loss but sold forward at a huge gain to somebody who will be able to monetise the original popular service (Google – YouTube, Yahoo – Flickr).

For those who would like to keep a weblog, my advice is if you don’t like writing or making photographs or painting – or something which creates original content – don’t bother. An ongoing uncommented scrapbook of links is too ephemeral to be worth the candle. In terms of content aggregrators, there are enough machines out there doing it and those programs work faster than you or I ever will – 24/7.

And if you are going to create substantial content, then you want a communication platform with at least the option for comments from users. My suggestion  is stick with WordPress/Foliopress.