Like most people in search, normally we don’t have a lot of time for social bookmarking. It’s a pretty busy year.

We’ve selected del.icio.us, Digg, Ma.gnolia, StumbleUpon and Technorati for now. I would really hate to see more than five icons at the bottom of my posts. Even that’s a bit of a stretch. The PR drain would be terrible but Denis de Bernardy very sensibly allows us to automatically put no-follow tags on all bookmarking services with a single checkbox.

What’s cool about using the external service is

AddThis got a very positive notice from Techcrunch, who are using it themselves. Discussion there focuses on whether AddThis has a viable revenue model. In short, you are probably making a few guys very rich with your data if you choose to use this AddThis. So far the commercialisation has been well under control but it’s a bit of a blackbox. If they start pushing advertising too hard, one can always remove AddThis (it’s a plugin and not something you have to write into each post by hand).

A final service which is apparently quite venerable and has a less commercial feel is AddToAny.com. It’s very easy to use even from the home page. While AddToAny have bookmarklets and buttons, the buttons aren’t so attractive and one has to roll one’s own and then dump the bookmarklet into your template. It requires considerably more technical fiddling on a site by site basis and a bit more technical smarts. They would do well to create a WordPress plugin of their own (maybe we’ll make one for them).

But personally I find the mix of buttons and text on their menu somewhat hard to read and quite ugly (while usability isn’t bad AddToAnyy could use a hand up from a good graphic designer).

I haven’t fully decided which of these services to use in the long run and across the client sites. I think I may end up going with AddThis as it is a ready-made plugin and the icon is very attractive. Who says looks don’t matter?

On the other hand, I may very well use AddToAny for any promotional campaigns I’m working on account of it’s quick and easy web interface with no pop-up windows apparent and disappearing address bars (hello AddThis!).

A late addition to the above is Alex King’s Share This. Share This is a lot better looking. 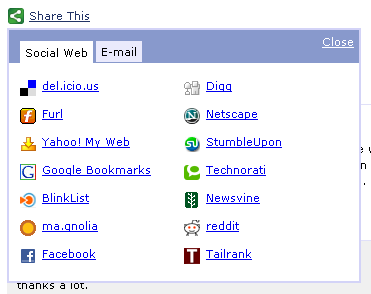 This is attractive coding. It’s a bit more trouble to implement as it has to match the weblog and it has some dependencies on some dicey Javascript called prototypes.js which doesn’t always work in IE 7.

Also the list of sites supported is much smaller (del.icio.us, Digg, Furl, Netscape, Yahoo! My Web, StumbleUpon, Google Bookmarks, Technorati, BlinkList, Newsvine, ma.gnolia, reddit, Facebook) but for general internet and web development the selection is good as Alex keeps on top of this kind of thing. For more specialised services he does have instructions on adding your own sites. Frankly that kind of code tinkering is a real nuisance – self-maintenance is very inefficient – so this is a real disadvantage. It would be better if Alex would keep a repository of all the sites out there so that a service only need be updated by one person for all to benefit.

If anyone has any extensive experience of working with Bookmark Me, AddThis.com, AddToAny.com or Share This on their own sites – positive or negative – I’d love to hear it.