Affordable VAST/VPAID for Wordpress has arrived. Serve ads with your videos starting today!
Pricing update 2021-05-22. Milanote is $9.99/month for single account and $49.99 for a team of 10. The team pricing is much more attractive than individual pricing. I'm not sure that Milanote is handling a need for individuals which couldn't be handled with a single fee bought application but it might work well for small teams. Definitely still like the built-in Markdown integration.

Evernote caused an earthquake last year with changes to their beloved freemium model. Many users were forced to pay if they wanted to keep using the app on more than two devices and enjoy storage space larger than 60MB/per month. I was one of those who accepted the changes (with a bitter face), but not long after the company raised the pricing again. By then, Microsoft OneNote was promoting its free product and Evernote migration tool. I was convinced, but never very happy about the OneNote's organization, and UI/UX.

If you read my comparison of Hootsuite and Buffer you know I am a huge fan of minimalistic and flat design. And it's pretty popular and trendy.

Milanote's "homepage" is an empty (at the beginning) canvas called Workspace where you drag and drop stuff. It is bordered by two bars - top and side.

Sidebar is the creative bar. Here you cab find your content options - Cards.

Navigation is easy and intuitive. Although in Beta version, I haven't experienced any major issues with content creation and editing. 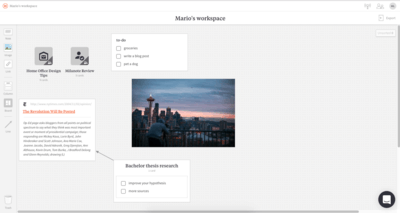 Every piece of content users produce is accessible from Workspace - the "homepage" Canvas. If you want to work on projects, or categorize your content and thoughts, you have two options: 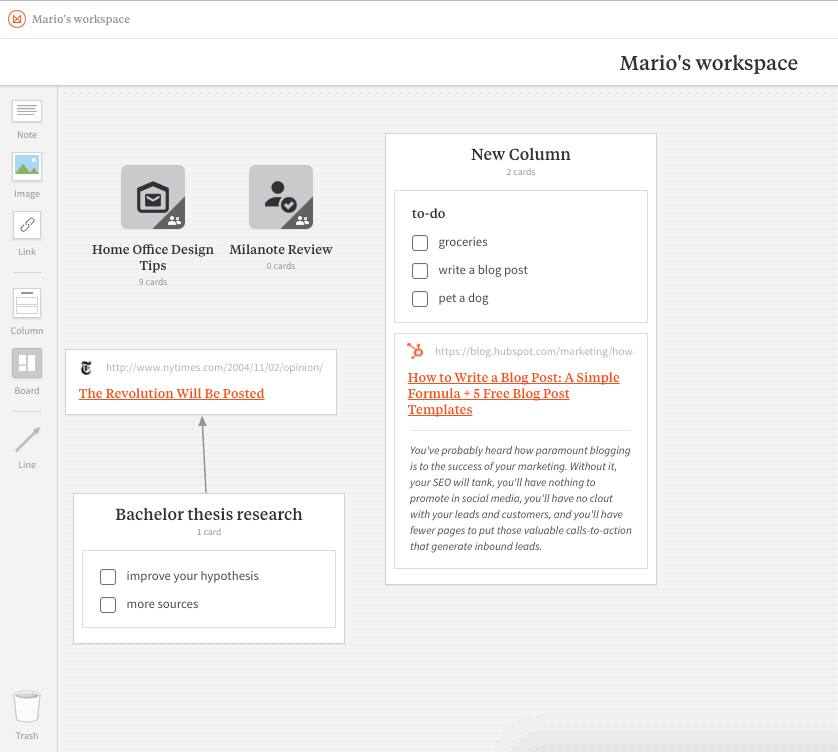 The best thing about Milanote's organization and interface is that everything is always in sight, visible and movable. Everything stays where you place it. Moreover, you can lock stuff (cards and boards) in their places.

There's no need to switch between notes in Milanote. They are just there. Simple as that.

I remember complaining about Evernote's text editing features - they didn't work very well. With OneNote, the text editing is great, but I don't like the way the notes are organized. What about Milanote?

If Evernote and Google Keep had a child it would be Milanote.

Seriously, it's the best of both worlds. Take note taking from the former app, interface from the latter, improve both of them, and this is what you get. 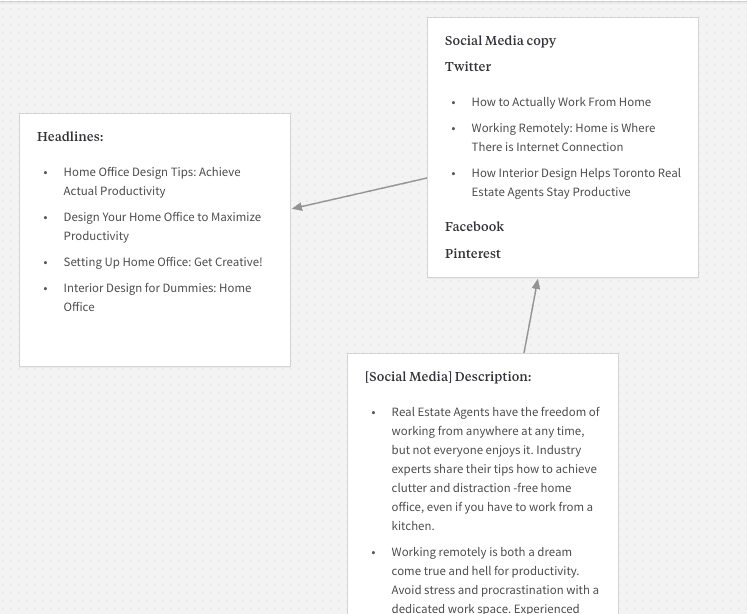 While text editing is not the main feature, or a point of focus, in Milanote it supports basic Markdown commands: 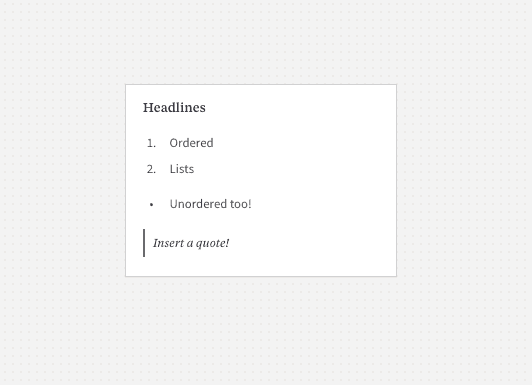 
Another great feature are keyboard shortcuts. There are plenty of them, but just to tease you:

When you are done and/or ready to share your work there are a couple of ways of going about it.

In the top bar type an e-mail address with whom you want to share your canvas and after they sign up/log in they can view your work and collaborate. You can view changes in the top right corner as well as who is currently working on it.

I shared a Board with my team leader so she could review Social Media copies, headlines, and visuals for a blog post I was working on. She did not have a Milanote account prior and when I asked her a day later what was her experience of creating it she said she didn't even remember it. Smooth.

In case you don't want the invited to edit your board, create a secret link which allows viewing only. 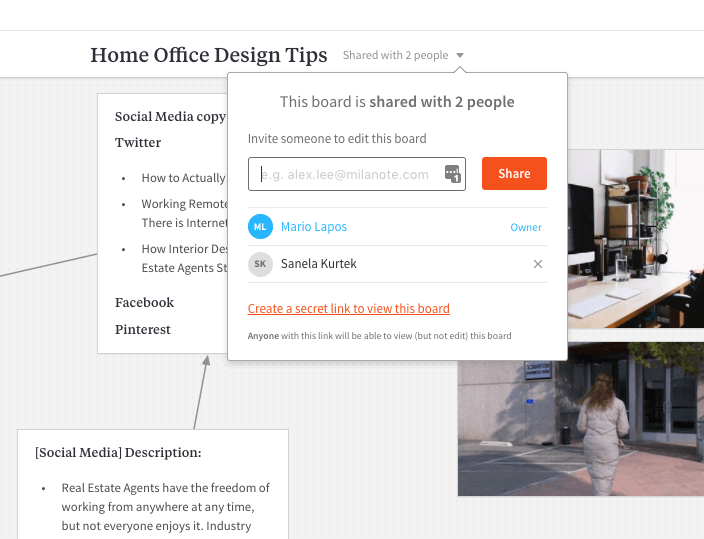 So, what is Milanote? The co-founder Ollie Campbell compares Evernote, bold move, to a box of lego. Yes, your notes, thoughts and such are with you everywhere and stored safely, but it's a pile of blocks. This is where Milanote comes in and allows to sort the pile of blocks (thoughts) according to shapes and colours (just an example, sort them anyway you like!). You can see what you have and begin the connecting process. Steve Jobs' quote "Creativity is just connecting things" is on point here.

But there is not much more to it. Collaboration and viewing are strong sides of this new Australian app, but collaboration works well also in Evernote. Plus, if you take your notes seriously with Evernote Plus you get to access them offline, while Milanote is web based (mobile version works fine, but there is no app yet).

Forget PDF annotation or anything close to the way Evernote handles documents. In my experience, I couldn't attach PDFs, .docx, and videos in Milanote.

The release of Milanote couldn't have come under worse/better circumstances. Evernote has just released 8.0 version of its app and it rediscovers the company. Wired wrote "it will try to make the transition from a note-taking app to being the place you do your best thinking". Evernote CEO defends the huge update by saying it drove him crazy it took two minutes to open the app and jot down an idea, by that time the idea was probably gone. One of Milanote's claims is "fast & tactile interface makes it easy to experiment, play, generate ideas and explore possibilities". Well, this is awkward for the newbie, isn't it? It's true Evernote still displays lists of notes rather than canvas, but it took a huge step towards simplicity of noting (it actually got rid of steps between having and idea and noting it, but you get it) and it has plenty more to offer in compensation for one feature.

Okay, for an average Joe who has more than 2 devices and wants to access notes offline Evernote is expensive. And while Milanote is in Beta it is free, but the co-founder Ollie answered my question in a chat and turns out it will cost you as well. It is not yet known how much, but he said this.

Milanote will be free to use until you hit the storage limit (100 notes, images or links). After that you can upgrade to a professional plan and get unlimited storage for a small monthly fee.

However, taking on Evernote, the industry giant (you may call it elephant in the room - pun intended) suggests Milanote is on to something bigger and big companies educate.

Now, time will tell if this move was in fact bold, or premature.