Foliovision had the opportunity to work with the best magazine for screenwriters, CreativeScreenWriting.com. They are using FV Player in their video store section to stream their video tutorials to members.

Screen writing is a form of art. It’s not easy transforming stories into a video format. How many times have you watched a movie and you liked the idea behind it, but the writing was so bad you had to give it up? It proves the fact that good screenwriters are as important as good actors and directors. 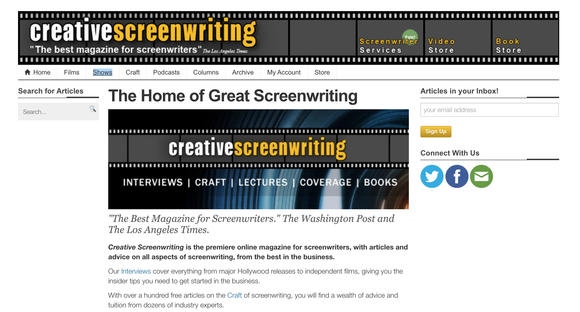 CreativeScreenWriting.com went live in 1994. During the 90s, it was a printed magazine, publishing about 25,000 copies six times a year. Now it’s only available online, catering for screenwriters and anyone interested in screenwriting. We talked to John Davis, the magazine’s editor, about the site:

In both Hollywood and the industry that covers it, there has always been a focus on directors and actors. But screenwriters are every bit as important!

John himself is a published author and has worked as a writer and editor for over 20 years. He won two Origin awards for his work on two turn-based strategic games based on the Lord of the Rings, called “Legends: The One Ring” and “Middle-earth PBM”:

Think board games for a large number of players played online, or MMOs where the action regularly stops to give players time to think about what to do next. I worked on the games as lead writer, which was a great honour, as I was granted permission to write fiction based in and around Tolkien’s books. 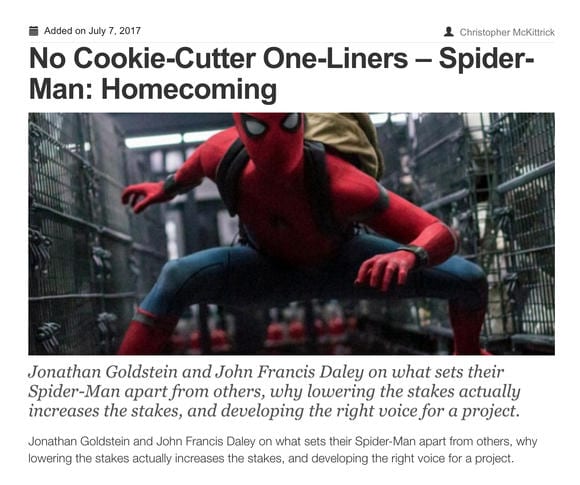 The writers and editors on the team come from all over the world, John told us:

We consist of the founder, Erik Bauer, executive editor Sam Roads, general editor John Davis (me!), US editor Chris McKittrick, and of course our freelance journalists. We are pretty international, with some people working out of LA, others elsewhere in the US, and several further afield in Canada and the UK.

When the magazine decided to drop its print version and go online, it was a practical decision. The film industry is huge and there are new movies coming out almost every day. To be able to keep up with the news it was only natural the magazine will turn to the internet:

Being online allows us to reach our readers more quickly and directly than a printed magazine – I can receive an article from a journalist in the morning, edit it in the afternoon, and have it available for our readers online in the evening. With a printed magazine, on the other hand, the articles could take several months to reach our audience. This is particularly important when covering new film releases, which may only remain in the public attention for a short amount of time.

Going online also allowed the writers and instructors to offer more than articles. They have an own online video store, where they sell a wide range of instructional videos covering all possible aspects of screenwriting. Whether you’re a beginner or you already have a couple of scripts on your resume, you’ll find videos for every situation. One of the most famous screenwriters on their list of instructors is definitely Joss Whedon, the writer of Buffy the Vampire Slayer, Toy Story, or the never-forgotten Firefly.

FV Player helps to protect the video content from piracy

CreativeScreenWriting.com uses FV Player to stream their pay-to-view video content. You can either watch them online, or you can order them as DVDs to watch them offline. 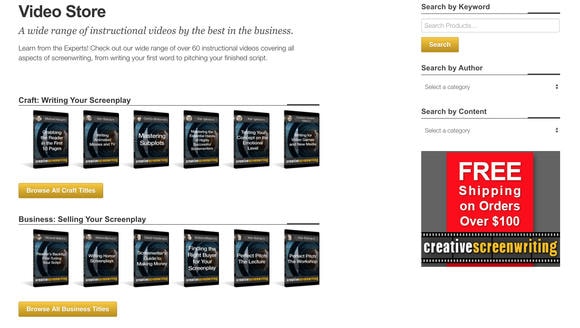 If you opt for the streaming, after buying the video, you’ll be able to access it online as often as you like. The video store is currently a combination of three services – WooCommerce, WooCommerce pay-per-post and FV Player in those pages to create pay-to-view options.

It allows us to have secure streaming from AWS so videos can’t be downloaded and shared without our permission. 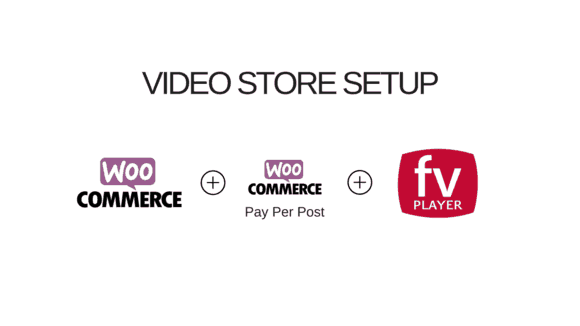 Using three plugins for the membership section of your website might sound complicated at first, but the advantage of it is that you get to control every step of the transaction and your videos are safe:

We rely on three different plugins, but it does mean our customers can use their same account with us to purchase both streaming and DVD videos, and we can link to both purchase options from the same product page, both of which were important to us. So while at our end it feels a bit messy, it is fairly seamless at the front-end where it counts.

In CreativeScreenWriting.com’s setup FV Player acts as another layer of security using encrypted HLS, which means no one can download and pirate your videos. And even if they manage to do it, because there is always a way, the “downloaded” videos won’t play.

How does this work?

FV Player is able to decrypt your encrypted videos hosted on Amazon AWS and play them only to the users of your site who have bought your membership or bought the specific video they want to watch.You find the whole process of setting up an encrypted HLS Stream with Amazon Elastic Transcoder in our guide.

It wasn’t just the secure streaming that made the team behind CreativeScreenwriting.com go with FV Player, says John:

We also wanted to be able to sell ‘box sets’ of multiple streaming videos, and it handles these as well.

FV Player supports playlists, which can be used to create the said ‘box sets’, you can sort your videos into these playlists and have multiple playlists on one page. A few weeks ago, we’ve updated the playlist design and now you can choose from four different styles and also customize them based on your site’s preferences.

This current setup works really well for CreativeScreenWriting.com and their video store. In the future, they also want to offer more free video content on the site in addition to the articles and in the age of video this is the right move for any online publication. If you want to learn more about screenwriting, or just read interesting articles and reviews of both old and new movies and TV shows, follow CreativeScreenWriting.com on Facebook or Twitter and learn from the finest screenwriters and script doctors in the business.