Unreasonable is a film festival focused on boundary-breaking films, where six artists were chosen to take on the challenge of rethinking an entire genre of film.

Among these lucky creators, Swedes Johan Perjus and Freshteh Piltan were asked the question – what is the future of surf films and what could be done that had not been?

Being friends and old surfers, they really took this Unreasonable challenge to their hearts:

Unreasonable links with evolution. To be unreasonable can be a healthy approach to life. To question. And not just take the boundaries you’re given. If any scientists back in the days would have been reasonable the earth might still have been considered flat.

Freshteh knew she wanted to be a director since she was 9. She noticed very early on that films have a power of shifting your stance and creating a change. To create mesmerizing visual worlds that encourage to see things beyond your normal field of vision became her goal. Johan, on the other hand, discovered film when he saw The Battleship Potemkin in high school. Being inspired by all kinds of art, he started by creating graffiti, graphic design and photography. Together, joying forces with surfer Soli Bailey, they created short film Antonym:

I think we felt it was an exciting experiment and chance to take surf films further beyond its normal form.

So let us imagine the world without water, where you can only surf in the most unexpected place – the desert. Exploring the momentums of surfing and our dependency on oceans, surreal imagery of this piece captures your attention from beginning to end.

We needed to think differently. We’re both concerned with environmental issues and the water shortage in California somehow inspired us to be a backbone of the film. And having a surf film without any water is quite a different take. 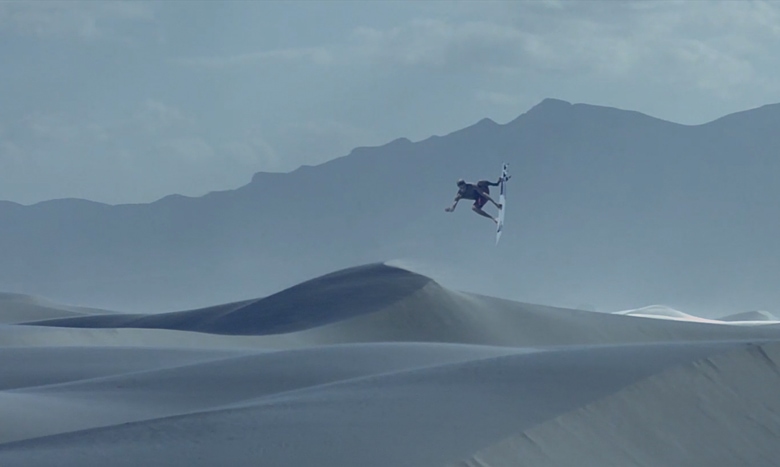