Harriet is “just like a fairy godmother, except her magical power is helping others have better sex rather than turning a pumpkin into a car. source: askmen

Harriet is the founder and owner of HarrietSugarcookie.com, an adult lifestyle magazine. Once you’ve watched a few of her videos, this might be hard to imagine, but as a teenager Harriet was struggling with social anxiety. She would lock herself in her room and just play video games to escape reality. She found it easer to communicate and socialise with people online. A perfect example of an ugly duckling, with low self-esteem who “didn’t consider herself pretty in any way,” she was very shy and insecure.

I had my fringe covering up most of my face, braces, super thick glasses and my best friend was cake. I found it insanely hard to talk to people and I’d always avoid any awkward social interactions.

That was until she discovered social interactions are actually pleasant and enjoyable.

It all started when her friend posted a photo on Reddit in the Asians Next Door subreddit. The photo got a lot of positive responses. “I’d never gotten that kind of attention before and I felt on top of the world,” Harriet told me.

She continued to post more and more revealing photos and when someone suggested webcamming, Harriet got the idea to start a website. Her goal was to have a place to host her videos on and to post other stuff as well. It would soon become a blog:

Hotel bathtub ?? this is probably one of my favourite outfits to wear! Boots are sexy no? harrietsugarcookie.com

I was interested to hear if people are actually reading the articles she posts, because I would imagine they visit the website just to watch the videos, but Harriet reassured me.

Harriet wants the website to be more like a lifestyle magazine “that has a connection with people,” which is why she often asks for tips on what to post about on Twitter. But a lot of times, people actually approach her asking for help for different kinds of situations they’re in.

I treat it as a normal magazine. If you have a magazine, or a presence on the web, you need to serve your readers. So I write about things they’re interested in and it sure helps I’m interested in the same things as well. You attract people similar to yourself, don’t you? 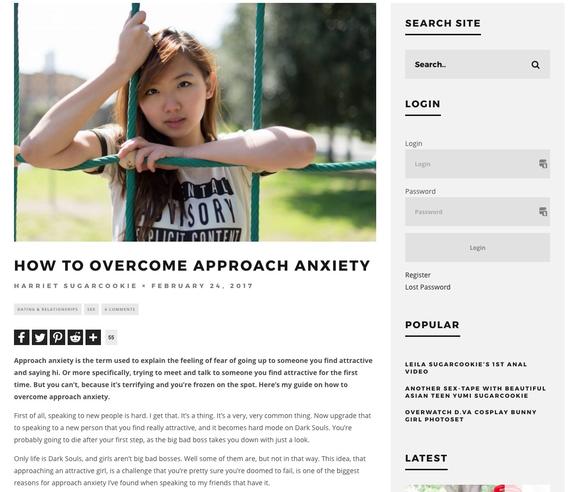 “She’s not out of your league! There’s no leagues! This isn’t football!”

When it comes the movie reviews and gaming tips and articles she posts, it’s also sort of an extension of her own life:

I like movies, I like video games. And just because people are interested in the videos I’m making, they’re also interested in what else I’m doing. It’s like with celebrities. People find some actresses incredibly sexy and they like looking at their pictures. But they also love finding out gossip about them, what clothes they’re wearing, where they’re eating, bands they like, opinions they have.

Ever since she started posting videos, the feedback she got made her change her whole life and her opinion about herself. It helped her with her self-esteem, and because of that, she’s trying to show other people that they can achieve the same. 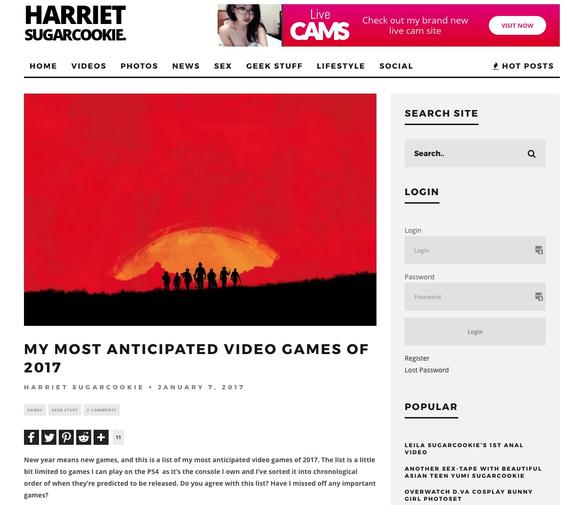 HarrietSugarCookie.com is a subscription based service. Subscribers pay a monthly fee to get access to streaming and downloading all of Harriet’s videos. If you sign up as a free member, you get to access three videos and all the articles.

I asked her what is more popular streaming or downloading and she says that streaming is becoming more popular, but you need to make sure the quality is absolutely perfect, before you switch over to streaming only. Which is why Harriet also allows her subscribers to download videos, because here is an interesting fact about adult videos — people like to enjoy the show on a big screen: 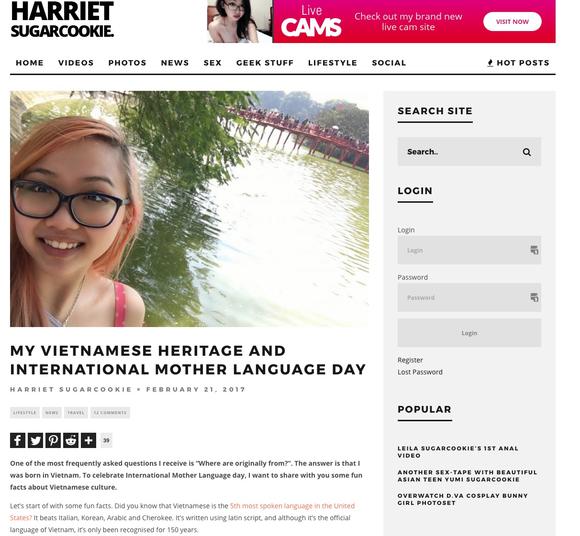 With more than 30,000 subscribers, the website became popular all over the world and with videos being hosted on Amazon S3, they just weren’t loading for viewers in Australia and Asia. Not to mention the large hosting bills due to high bandwith usage.

We used Amazon, because we liked the flexibility and the lack of contract, and it was a great option. But we knew that if we wanted to make the streaming experience better for the subscribers, we’d have to move the videos to CDN*, and I was afraid it would be too expensive.

She was already using FV Player on her website, so she contacted Foliovision to see if they knew a way to solve this.

Foliovision found a solution and managed set up a hybrid system for Harriet, with videos being hosted on a VPS (Virtual Private Server) in front of which comes StackPath CDN*, making it possible for people around the world to enjoy the same loading speed as viewers who are closer to the original server. This resulted in the increase of the download speed and made seamless streaming possible for viewers around the globe.

Another issue Harriet was trying to solve was video hotlinking. Before the switch she was using FV Player with Amazon S3’s signed URLs. That made the video links accessible only with a specific secure token* for a pre-set period of time, making them unusable after expiration. Since we moved Harriet to a new hosting system, we added support for StackPath’s secure token, that provides the same hotlinking protection with signed URLs for half the price.

With this new set up, Harriet’s videos are protected from members hotlinking them and they load faster no matter where in the world you want to watch or download them.

Now our members from all around the world can watch the videos without any problems, they’re happy and we get less complaints. Before, streaming was impossible and downloads were unreliable! So you’d get to 99 per cent download and something would go wrong, and you’d have to download each video about 5 times. But now it’s super fast and we haven’t had any complaints, which is really great.

This new system literally cut Harriet’s hosting and bandwith costs to half, while allowing her viewers all around the world to enjoy her videos to the fullest, whether they are downloading them to watch on their TV screens or streaming from the website.

*CDN – Content Delivery Network, is a globally distributed network of proxy servers deployed in multiple data centers. Its goal is to to serve content to end-users with high availability and high performance. When a user visits a website, CDN will check the geo-location of the user and serve a file from a caching-node that’s closest to the user, instead making a call to the origin server, that can be physically very far away. If there are no files available at the closest caching-node, they will be requested from the next closest and if there are no such files in the CDN, they will be requested from the Origin server. That means the first request will load from the origin to the caching-node, but is stored and served from there afterwards, making the loading of all website content much, much faster.

*Secure Tokens: If your videos are protected with secure tokens, it means that whoever wants to access your video needs a token, sort of an access key if you will. Using tokens helps preventing downloads and playing the videos.